With the distribution of the “Cartilla Moral” of López Obrador’s government and its autoproclaimed “4th Transformation” many Mexicans fear a period of government propaganda and indoctrination.

CDMX. – (Agencies) The National Fellowship of Evangelical Christian Churches (CONFRATERNICE) is ready to distribute the “Moral Handbook” which will begin next week.

Arturo Farela, president of the National Confraternity of Evangelical Christian Churches, confirmed to the newspaper “EL UNIVERSAL” that through their temples, the document will be distributed as well as delivered in homes.

He explained that in a first stage they expect to distribute 10 thousand copies. With the “Moral Handbook” they seek to contribute to the fight against violence and to the reconstruction of society.

On February 22, Arturo Farela and other evangelical organizations met with Andrés Manuel López Obrador at Mexico´s National Palace regarding the “Law on Religious Associations and Public Worship”. This, with the aim of being granted concessions in public media. 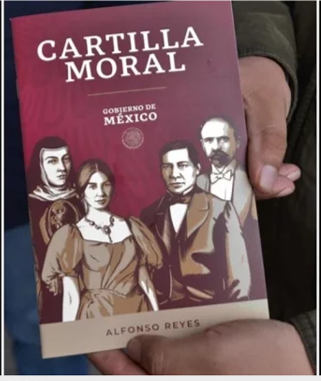 What is the “Moral Handbook”?
When Andrés Manuel López Obrador launched his third campaign for the presidency of Mexico, he declared himself “sponsor” of a “new current of thought”, whose motto is “transforming Mexico from family and values” and for that, AMLO expressed the creation of a “moral constitution” for the country.

On multiple occasions he has expressed that it would be to “promote a moral paradigm of love for the family, neighbor, nature and homeland”.  After assuming the presidency, AMLO materialized that idea through a decalogue called “Moral Handbook” that he hopes to distribute, at first among 8.5 million beneficiaries of social programs.

According to López Obrador in different forums, all those who receive support from the government will receive a copy of the document.