Members of a secret Facebook group for current and former Border Patrol agents joked about the deaths of migrants, discussed throwing burritos at Latino members of Congress while visiting a detention facility in Texas on Monday and posted an illustration of Alexandria Ocasio-Cortez engaged in oral sex. 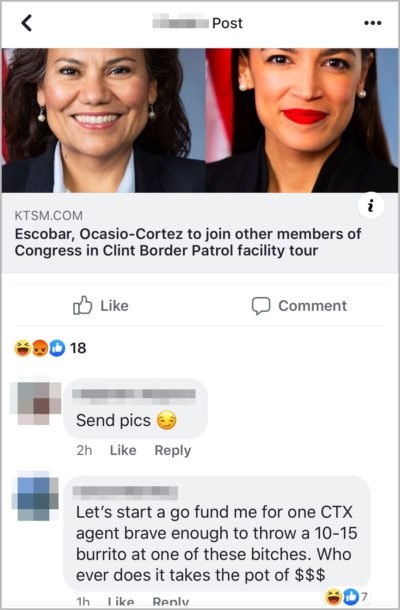 U.S. Customs and Border Protection claim they are investigating a secret Facebook group for current and former CBP agents where users mocked the deaths of migrants and posted sexist and racist jokes about Latino members of Congress, including Rep. Alexandria Ocasio-Cortez, D-New York.

“Today, U.S. Customs and Border Protection was made aware of disturbing social media activity hosted on a private Facebook group that may include a number of CBP employees,” said Matthew Klein, assistant commissioner for the agency’s Office of Professional Responsibility, in a statement. “CBP immediately informed DHS Office of the Inspector General and initiated an investigation.”

ProPublica first reported on the private Facebook group, which is called “I’m 10-15,” referring to the Border Patrol code for “aliens in custody.” According to the report, the page was created three years ago for current and former Border Patrol workers, and has about 9,500 members.

ProPublica posted screenshots and quotes from the page showing members making fun of the deaths of migrants — cases that have drawn intense scrutiny and criticism for the agency. Democratic lawmakers have accused the Trump administration of overseeing an “epidemic of death” at the U.S.-Mexico border.

One thread showed members discussing an Associated Press photo of a Salvadoran father and his 23-month-old daughter who drowned in the Rio Grande while trying to cross into the U.S. The picture, which shows their bodies floating in the water, caused an uproar after being published by news organizations nationwide last week.

“I’m not trying to an a$$ but I HAVE NEVER SEEN FLOATERS LIKE THIS,” one member of the Facebook group wrote, suggesting the photo could have been “edited.” “We’ve all seen the dems and liberal parties do some pretty sick things…” the user wrote.

Another post shows members shrugging off the death of a 16-year-old Guatemalan boy who died in Border Patrol’s custody in May. “If he dies, he dies,” one user wrote.

The page also reportedly includes a photo illustration of Ocasio-Cortez giving oral sex in an immigrant detention center, and another of Trump shoving her face in his crotch.

Members ridiculed Ocasio-Cortez and Rep. Veronica Escobar, D-Texas, for their planned visit to a Border Patrol facility outside El Paso. Users called the congresswomen “hoes” and “scum buckets,” and one said agents should throw a “burrito at these bitches.”

“These posts are completely inappropriate and contrary to the honor and integrity I see—and expect—from our agents day in and day out,” U.S. Border Patrol Chief Carla Provost said in a statement. “Any employees found to have violated our standards of conduct will be held accountable.”

This just broke: a secret Facebook group of 9,500 CBP officers discussed making a GoFundMe for officers to harm myself & Rep. Escobar during our visit to CBP facilities & mocked migrant deaths.

This isn’t about “a few bad eggs.” This is a violent culture. https://t.co/SkFwThHElx