Health, Governance and Education, the agencies that reported the lowest, via the Transparency Institute of Access to Public Information

In the first semester of the federal government, 14 undersecretaries have resigned from collaborating in the project of President Andrés Manuel López Obrador, which he calls the fourth transformation (4T), according to Transparency responses sent by each of the Secretariats to requests for information entered by news outlet 24 HOURS.

The agencies were asked how many resignations in this hierarchy were presented from December 1, 2018 and the Secretariat that reported more cases are in the Ministries of Education and Health, as both reported three resignations at the undersecretariat level.

In addition to them, the agencies stated that 227 general directors also submitted their resignations to the so-called “fourth transformation”.

In the case of the general directorates, the Ministries of Health, Interior and Education registered more resignations, with 37, 31 and 24 cases, respectively.

The Ministries of State, the Mexican Social Security Institute (IMSS), the Institute for Security and Social Services for State Workers (ISSSTE), the Federal Electricity Commission (CFE) and Petróleos Mexicanos (Pemex) were also questioned about the number of reliable personnel who were absent during the period mentioned above.

The Ministry of Public Function reported the lowest number of cases in this category with 512, while the Ministry of Foreign Affairs stated that 280 trusted workers were dismissed.

Pemex also reported 170 resignations in this area, of which it noted all have received their severance pay.

Failure to comply with union members
Since the beginning of the current administration, AMLO has stated that the cuts in the federal administration will correspond only to those who occupy “high bureaucracy” positions and not to positions of unionized personnel. However, the secretariats that did report dismissals of unionized or grassroots personnel were Foreign Relations with 27 cases and the ISSSTE with 24 cases.

Pemex also reported 11 casualties of unionized personnel; however, it specified that these were resignations presented by the workers. Secretariats such as Economy, Treasury and Labor argued that they do not have information on “dismissals” of base or unionized personnel or positions of trust, so they filed appeals for review.

Sedena provided a link in which it informs of the total loss of personnel, until March 31, it has different items, and those attached to this request indicated that 280 members requested their resignation, and there were 580 contract cancellations.

The Navy Secretariat indicated that there are no resignations by undersecretaries or general directors.

In the public information on Navy personnel casualties, the agency indicated that 75 sailors requested to be discharged and 18 contracts were terminated, according to the cut given to April 30, 2018.

It should be noted that the Secretariat of Welfare, IMSS and the Federal Electricity Commission requested an extension to respond to the request entered through this means. 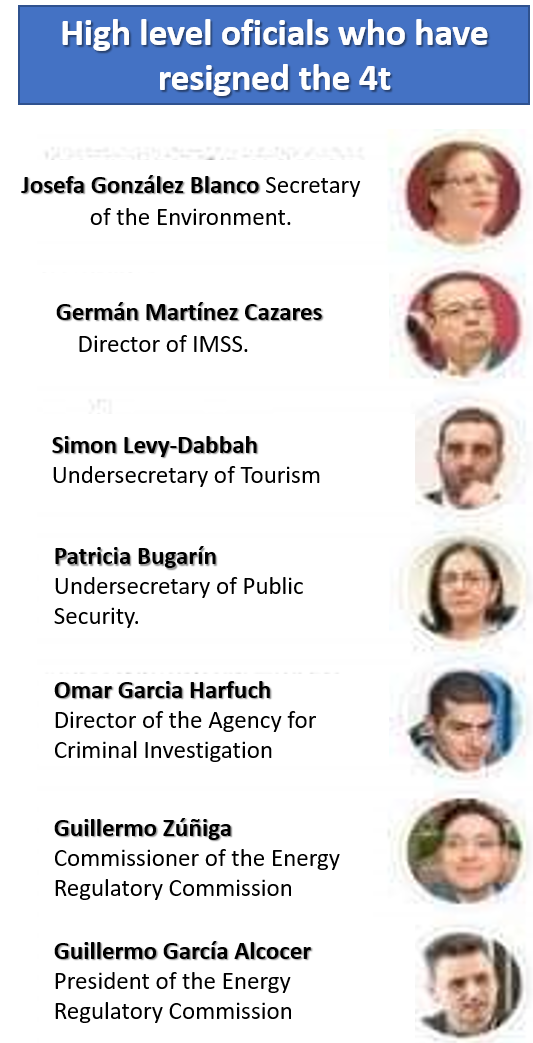 Controversial Resignations
Personal motives, influence or disagreements with the austerity and immigration policies of the current administration have led to the resignations of senior officials to the Government of the so-called fourth transformation.

The first resignation was of Simon Levy-Dabbah, Undersecretary of Planning and Tourism Policy of the Secretariat of Tourism, who alleged personal reasons.

In turn, on May 21, German Martinez resigned as director of the Mexican Institute of Social Security (IMSS), protesting the austerity measures implemented by the Ministry of Finance, which in his opinion, would generate a crisis in patient care.

“Some officials of the Ministry of Finance has a pernicious interference in the IMSS and put at risk the egalitarian vocation of justice and, specifically, the provision of health services that has the Social Security, try a cosmetic remodeling of the IMSS,” he said in his farewell speech.

He added that austerity policies seek more “Savings and more savings, staff cuts and more staff cuts, and an institutional redesign where the position matters more than the job”.

Martínez said he believes in Andrés Manuel López Obrador’s project “because he is not the manager of those who think they own the country. He is no one’s flower vase, as he himself says. I will follow his example: neither will I be a vase in the IMSS of decisions taken outside the IMSS”.

After his resignation, Germán returned to the Senate.

On May 25, Josefa González Blanco Ortiz Mena resigned from the Secretariat of the Environment after he asked Aeroméxico to delay a flight from Mexico City to Mexicali, which was about to take off.

“Yesterday I caused a delay to the passengers and crew of a commercial flight. The real change requires that no one has privileges and that the benefit of one, even to fulfill their functions, is not above the welfare of the majority,” she wrote in her Twitter account.

A few weeks ago, the head of the National Migration Institute (Inami), Tonatiuh Guillén López, resigned from the federal government because of differences in the implementation of the plan to alleviate illegal migration from Central America.