MEXICO city, Mexico. – In another error and miscalculation of this nefarious administration of López Obrador, the National Center for Energy Control (Cenace) declared the Yucatán Peninsula in Emergency Operative State; that is, that the demand for electricity exceeds the generation capacity.

In an official statement issued yesterday Monday June 17, the agency explained that in the coming months – without specifying how many – there will be unavailability of natural gas on the Peninsula, which will result in three of the region’s combined cycle power plants working at 75 percent of their total installed capacity of 1,252 megawatts per hour (MW). “Only about 315 MW will be available in combined cycle plants consuming natural gas,” the release says. 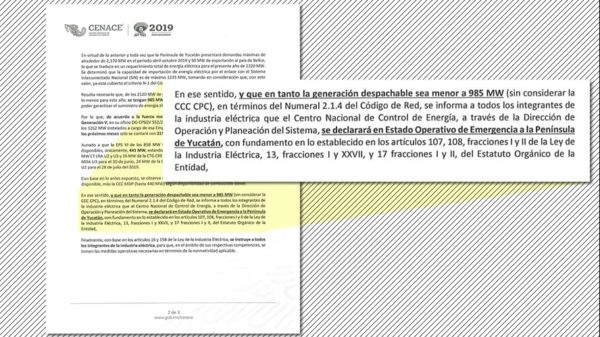 The Mérida III combined cycle plant, for example, will operate at medium load during the hours of the day that have high demand and will be disconnected when demand is low to recover diesel inventories, explains the document.

Thus, Cenace states that of the 2,120 MW of installed capacity in the region, there should be at least 985 MW available to guarantee supply in the Peninsula, although only 732 MW is available.

“In that sense, and as long as the dispatchable generation is less than 985 MW (without considering the CCC CPC), in terms of numeral 2.1.4 of the Network Code, informs everyone of the electric industry of the Energy Control Center, through the System Operation and Planning Directorate, declares the Yucatan Peninsula in Emergency Operating State, based on those established in articles 107, 108, sections I and II of the Electric Industry Law, 13, sections I and XXVII, sections I and II of the Entity’s Organic Statute”, reads the communiqué issued.

During an Emergency Operating State, Cenace may give special instructions or make decisions based on exceptionality, and thus could, for example, declare priority areas for electricity dispatch.

“The Cenace operates not in market conditions, but in conditions of stability of the system and decides in a special way which are the criteria of dispatch (…). It does not mean that there will be no energy, but it does mean that in the event that the Cenace passes, it can take extraordinary measures,” explained Paul Sánchez, founder of Ombudsman Energy Mexico.

So far in 2019, the Peninsula has already suffered three blackouts between April and March.