Puerto Vallarta, Mexico is a world leader in the fight against homophobia

Puerto Vallarta, Mexico – The 2019 Vallarta Pride celebrations kicked off on Friday May 17th with an official ceremony for the National Day of the Fight Against Homophobia at the Puerto Vallarta City Hall, where Mayor Arturo Dávalos Peña recognized LGBT community leaders who, in turn, thanked the municipal president for being an ambassador of inclusive public policies.

Accompanied by his wife, DIF President Candelaria Tovar de Dávalos, and representatives of various LGBT organizations, the Mayor emphasized that Puerto Vallarta is recognized internationally as the world’s second most important beach destination for the gay community, after Tel Aviv, Israel. “This is an important distinction because it represents economic income, more tourism, more employment, and, above all, the fact that this city belongs to all and is for all,” he said.

He went on to say that, today, Puerto Vallarta is a world leader in the fight against homophobia, and is considered a model city on various issues, such as the promotion of LGBT tourism, respect for human rights, making the problem visible, and making the decision to take actions to eradicate it.

The Mayor thanked the LGBT community for having chosen him as their ambassador, saying he was proud of that trust, which has enabled the team to join forces and align objectives.

“In this paradise, the times for homophobia are being forgotten… it is a new era. Personally, I have had the honor of officiating the first civil union of same-sex couples in our city; inaugurating the Office of Gender Equality in Lázaro Cárdenas Park, which provides LGBT tourist attention and promotes social diversity; and participating in the Vallarta Pride Parade for two years running,” he said.

In closing, he confirmed his commitment to continue strengthening Puerto Vallarta as an inclusive destination, a city in which there is equality and non-discrimination, where the human rights of all are respected and the welfare of its people is promoted.In the framework of this commemoration, acknowledgments were given to local leaders of the LGBT community, including Ed Thomas, the founder of Puerto Vallarta’s LGBT Community and Wellness Center, S.E.T.A.C., for his tireless efforts to reduce HIV and other STDs in the Banderas Bay area; Francisco Arjona, the current director of SETAC and former director of Vallarta Enfrenta el SIDA A.C.; and William Hevener, the first promoter and organizer of Vallarta Pride.

Recognition was also given to Paul Crist, the founder of Vallarta Enfrenta el Sida AC., for being one of the city’s first promoters of AIDS prevention and support programs; and to LGBT Colectivo Vallarta coordinator, Héctor Gabriel Ramírez Betancourt, for his tireless struggle and social and political activism in favor of Puerto Vallarta’s LGBT community. 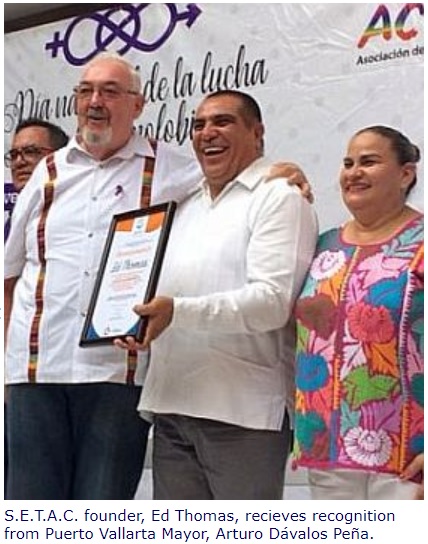 Ramírez Betancourt and Vidal Meza Peña, the president of the LGBT Trade and Tourism Association (ACT LGBT A.C.), thanked the mayor for the support provided to the LGBT community in all their concerns and demands.

With respect to Vallarta Pride, ACT LGBT president Vidal Meza said that its purpose is to celebrate the rights of the community, especially now that they have the support and recognition of local authorities.

He reiterated that Puerto Vallarta has become a benchmark for gay tourism, pointing out that Newsweek magazine recently recognized Playa Los Muertos as the second-best Gay Friendly Beach in the world, after Hilton Beach in Tel Aviv, Israel, which is the country of origin of the international ambassador of this seventh edition of Vallarta Pride, Eliad Cohen.

by Lorena Sonrisas for Banderas News