The man, identified as Alexander

In the past 3 days, hundreds of news outlets around the world have published a note regarding a Russian man who was found in a cave, in what has been described as ‘corpse-like’ after having his back broken by a bear, which was saving him to eat later. This note, immediately became viral.

The man, only identified as Alexander, was discovered by hunting dogs in the country’s remote Tuva region, close to the border with Mongolia. The hunters thought the body was mummified but soon realized that the man was still alive.

The shocking images showed Alexander’s face and body decomposing after lying in the same position for a month. He had open wounds, blood and dirt all over him. His grey skin was starting to rot away and his eyes looked dull and could hardly open. 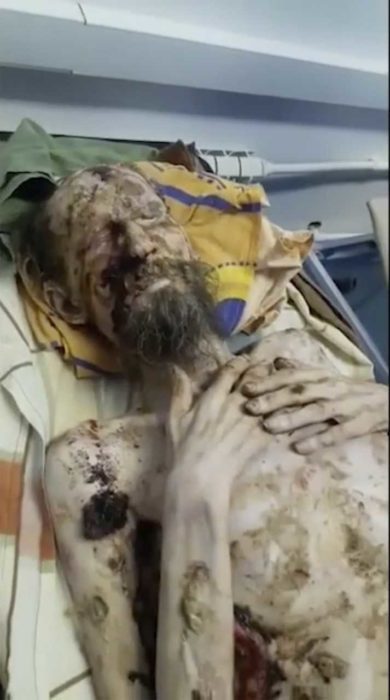 On June 26, 2019, news sites such as the Daily Mail, the Sun, and the Metro published photos and a video that supposedly showed the nearly mummified “Alexander”. The video, allegedly shows the man being treated at a hospital after his suffering.

Before this video made it to internet and the tabloids, it circulated on Russian messaging apps with equally outlandish, unbelievable stories. The website Kaotic (a NSFW content website) published the video claiming that it showed “an old man … on a gurney waiting for treatment from a terrible skin condition.” The video was also shared as if it showed a man who had been buried alive, only to escape after a local cemetery was flooded by heavy rains.

The bear-attack claim first gained media traction from the site EADaily, but even that site admitted the claim had not been verified. Shortly after holes emerged in this story, EADaily published an update explaining they had received the video from a single source (“a businessman in Tuva”) who had received it from some hunting friend… Basically the story originated with a friend of a friend of a friend, and no first-person have confirmed the “bear attack” version of this story. Officials in Tuva have said that they were unaware of any such incident having taken place there, and that this person was not being treated at any local hospitals.

It’s still unclear as of what really is going on in these images and behind the story, however, some have theorized that this person could be the victim of a drug known as Krokodil, which can cause extreme skin ulcerations, infections, and gangrene. Other possible explanation is that the footage may feature some sort of zombie movie prop.

One thing it is clear, the news are fake since there is no nearly mummified “Alexander” rescued after a bear broke his spine and kept him in a cave for more than a month.