The Mexican government has released a copy of a deal Donald Trump waved in front of reporters this week that he called “the agreement that everybody says I don’t have.” According to the president, the document detailed previously unannounced immigration concessions agreed to as part of a deal between the US and Mexico that was negotiated both in order to reduce the number of South American immigrants arriving at the US border and to keep the Trump administration from levying tariffs on Mexico.

The text of the letter reveals a commitment to begin discussions for a future agreement — essentially making it an agreement to negotiate an agreement — and is, as many expected, not a “deal.” It does, however, point to a future deal that could contain a win for Trump.

Dated June 7, the letter states that the US and Mexico “will immediately begin discussions to establish definitive terms for a binding bilateral agreement to further address burden-sharing and the assignment of responsibility for processing refugee claims of migrants.”

This future agreement would include “a commitment under which each party would accept the return and process refugee status claims, of third-party nationals who have crossed that party’s territory to arrive at a port of entry or between ports of entry of the other party.”

In the letter, Mexico commits to examining its current immigration control practices and identifying legal changes that may be necessary to bring the outlined agreement into effect. It also sets a timeline for assessing the effect of changes agreed to in early June.

Under the presidential threat of escalating tariffs on all Mexican goods starting at 5 percent, the two countries announced each would take steps to address immigrants and asylum seekers traveling to the US from South America. The US promised to speed up the processing of asylum claims; Mexico promised to deploy 6,000 members of its National Guard, mostly at its border with Guatemala.

According to the letter, Mexico has agreed that if after 45 days this deployment and any other measures it takes “have not sufficiently achieved results in addressing the flow of migrants to the southern border” in the eyes of the US, then Mexico will take “all necessary steps” to bring the still to be negotiated agreement into force within the next 45 days. 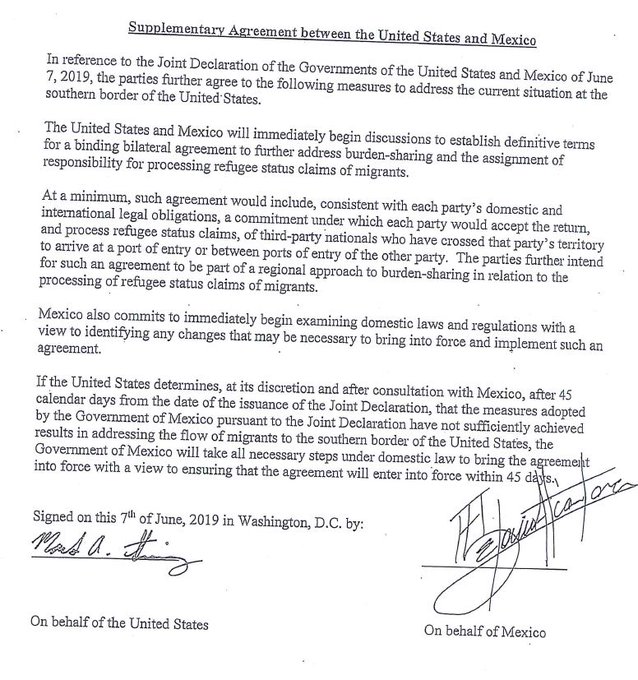 The letter was presented in the Mexican Senate on Friday by Mexican Foreign Secretary Marcelo Ebrard, and was first published by the Mexican newspaper Reforma. It seems to contradict a series of tweets Trump sent out following the release of a joint declaration outlining the terms of the deal in which the president claimed that some elements of the agreement had not been publicly revealed, but would be “announced at the appropriate time.”

Ebrard, who has previously contradicted Trump by stating that there is no secret or outstanding deal between the two nations, repeated there was no other agreement Friday, according to Reforma. Ebrard said the two sides will reassess the migrant situation at the 45 day mark.

Mexico appears to be taking steps toward readying itself for that deadline, with Mexico’s immigration chief Tonatiuh Guillén resigning on Friday at the request of President Andrés Manuel López Obrador. López Obrador is proposing prisons director Francisco Garduño as his replacement, the AP reports, as part of a “crackdown on irregular migration through its territory in response to US pressure.”