Mauricio Vila Dosal Governor of Yucatán held a meeting with Arnold Donald, CEO of Carnival Corporation, one of the most important companies in the sector worldwide, which last year brought to Yucatán 411,387 passengers through 130 cruises that arrived in Puerto Progreso.

Vila and Donald talked about the great potential that the port of Progreso holds in the future for Carnival Corporation, and how it can turn into a world-class cruise destination and the threshold to the Maya World for passengers from all over the world.

The head of SEFOTUR Michelle Fridman Hirsch was also present at the meeting with Donald and other Carnival Corporation high executive.

Who is Arnold Donald?

Arnold Donald, today CEO of the world’s largest leisure travel company, Carnival Corporation, was once recognized as an academically gifted student, so his parents enrolled him at St. Augustine, an all-male, all-black Catholic high school in New Orleans.

Everyday, three times a day, the school blasted this message through its PA system: “Gentlemen prepare yourselves. You’re going to run the world.”

These nine words had a profound impact on a young Donald, who grew up in New Orleans’ poverty-stricken, crime-ridden 9th Ward and attended high school during the civil rights movement.

At age 16, Donald decided that he was going to be a general manager at a Fortune 50 science-based global company and he began creating a career plan.

“I mapped it my junior year in high school and I kept mapping throughout college,” the 63-year-old CEO stated on an interview with CNBC.

At the age of 32, Donald was named general manager at Missouri-based agricultural biotech company Monsanto and achieved the goal he had set half a lifetime ago.

After spending roughly two decades with the organization, Donald purchased Monsanto’s Equal sugar substitute with a group of investors. Together, they created a new company called Merisant, with headquarters in Chicago. Donald led as CEO for three years before stepping down and remained as chairman for two more years before retiring at age 51. 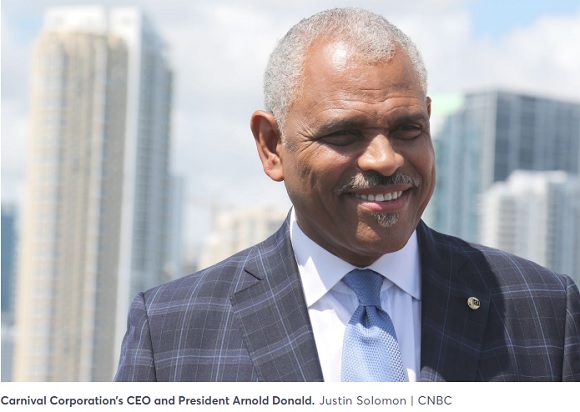 In 2013, Carnival Corporation called him out of retirement. Donald took over the company and five years later, the travel brand experienced a remarkable turnaround.

For two consecutive years, the cruise line has boasted it’s highest profits in the company’s 45-year history and has nearly doubled its stock price from $34.85 in 2013 to $66.91 at the end of the first quarter of 2018, according to Carnival.

Donald’s performance as CEO hasn’t gone unnoticed either. In fact, CNBC’s “Mad Money” host Jim Cramer called him “the man who may be the best turnaround artist of our time.”

However, Donald says that his rise to the top of Carnival’s $48 billion empire was simply a matter of internalizing St. Augustine’s call nearly 50 years ago.

“If you prepare and [have] no excuses, you can pretty much do whatever you want,” Arnold Donald concluded the intrview with CNBC.