A new poll reveals that the number of people dissatisfied with López Obrador’s way of governing is growing. The digital marketing research agency “Mexico Elige” presented its most recent survey to the media, here´s the methodology: 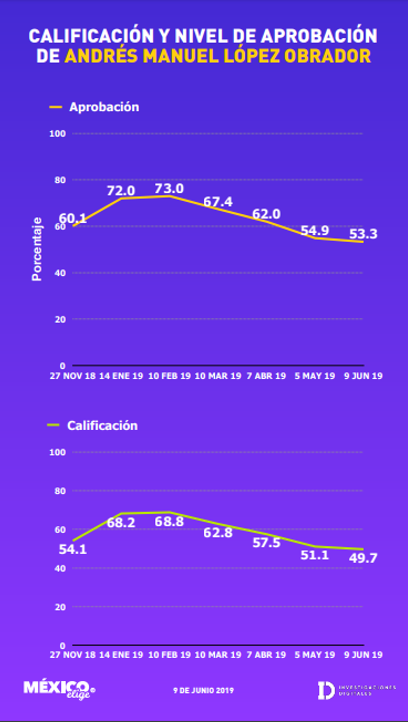 Those who would vote for Lopez Obrador to remain in the presidential chair amount to 52% of the population, that’s 18.7 percentage points less than last February.

In four months, the popular perception of Andrés Manuel López Obrador’s performance has turned negative and even increased the number of people who believe the president should resign.

A national survey prepared by Mexico Elige, a marketing research agency, details that, if a recall process of the presidency takes place, 42.5% of Mexicans would vote for AMLO’s resignation.

Those who would vote in favor of López Obrador remaining in the presidential chair amount to 52% of the population, however, this percentage represents 18.7 percentage points less than the figure for February of this year (70.7%).

The proposal of revocation of mandate, which is analyzed in Congress establishes that this process would be carried out on the same day as the electoral day in which federal deputies are elected and could be requested by the Congress of the Union.

AMLO’s approval level also decreased in June 19.7% since February, when it reached its highest approval level with 73%. The same happened with the “rating” assigned by the respondents, since in the second month of the year López Obrador had an average of 68.8 and by June decreased to 49.7.

Despite this drop in acceptance of his administration, the president’s decisions during his first six months at the helm of the federal administration continue to be rated as positive by the majority of those surveyed.

As an example, when asked why officials such as Germán Martínez Cázares, director of IMSS; or Josefa González Blanco, former head of SEMARNAT resigned; 54.4% of those surveyed indicated that they did not agree with AMLO’s vision.

Respondents also pointed to “the corruption of past governments” as the first cause of drug shortages, with up to 48%; while 69% considered the cancellation of company taxes to be positive.

The survey conducted by Mexico Elige was applied to 10,987 Mexicans with access to Facebook from June 4 to 8 of this year.