Mexican authorities stated that an explosive device inside a book caused minor injuries to a senator when it blew up in her office.

President Andrés Manuel López Obrador declared on Thursday My 30th, that the device received by MORENA’s Senator Citlalli Hernández was a “homemade bomb” designed “to cause damage.” He said the attorney general’s office was investigating. 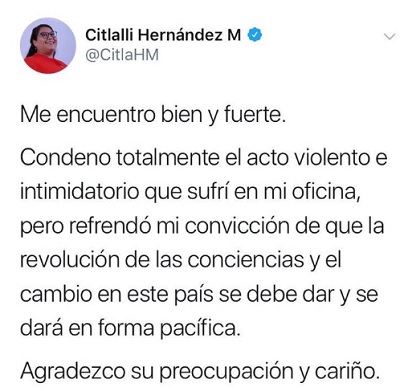 Later on, the senator wrote: “Necessary security measures have been taken and we will let competent authorities address the case.”

While Mexican journalist and TV anchorman Joaquín López-Dóriga reported that the two X-Ray devices installed at the entrance of the Mexican Senate building were temporarily “out of order”, when the book-bomb was delivered, and taken all the way up to the senator’s office.