Son of Yucatecan immigrants gets accepted into Harvard

Oswaldo Vazquez, Ozzie as his friends and family call him, has lived in constant struggle ever since his parents, both from Motul, Yucatán, like millions more, decided to cross the northern border in search of better opportunities.

Ozzie was born in Los Angeles California in the year 2000, and in 2005, when his parents’ visas had expired and they were afraid that their whole life-project would come to an end with deportation, they decided to go back to their hometown Motul, Yucatán; as they could not conceive the idea of ​​being separated from their three children.

Ozzie’s only friend in Yucatán was a computer, he used it to overcome loneliness. He was not Yucatecan nor “gringo“, and he felt he did not fit in Motul, he felt like a foreigner in his own parents’ land.

His way to escape from that misfit feeling was the computer screen, in which he instructed himself in advanced programming and started designing his own video games.

Ozzie’s older sister returned to Los Angeles with her aunt and graduated from UCLA; and at that moment, he knew which example he wanted to follow. Four years ago he moved back to LA, where he now lives with his mother’s sister.

Since he had spent his childhood in Yucatan, Ozzie forgot the English language he had mastered as a child, but he did not give up and worked hard on his language skills. At the Global Studies School in the Unified District of Los Angeles, he stood out as one of the best students.

The school did not have advanced classes, so he began to take other courses in different places; computer science, calculus, biology and arts. In his spare time, he volunteered and helped people with issues of homelessness, violence and abuse. He also entered a journalism course at Princeton University. 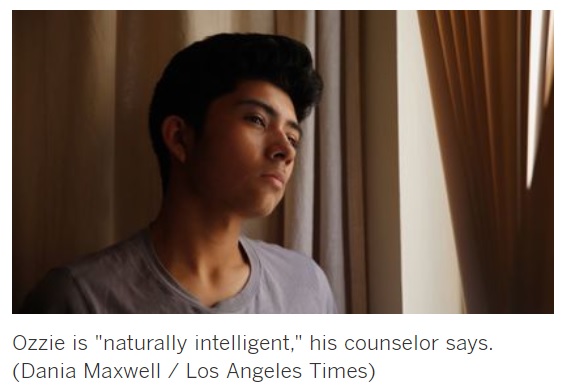 It was time to move forward, Ozzie aimed to the highest goal and applied for Stanford, Princeton and MIT. The three rejected him. But this young man is no quitter, and despite the coup, he continued applying for different colleges, until his application was accepted at UC San Diego, Cal Poly San Luis Obispo, Fordham and UC Santa Barbara. Later on, he received good news from one of his dream schools: UCLA, where they offered almost a full scholarship.

However, the decision was not taken yet, there was still hope to receive news from two more schools of the Ivy League: Dartmouth and Harvard.

At 3:30 pm on Thursday, March 28, 2019, a date Ozzie will never forget, he went to his counselor’s office. The time had come to get online and check out the latest results of the application. First he checked UC Berkeley, he was accepted.

Ozzie and his counselor, Miss Diane Kantack, were really nervous to continue with Harvard and Dartmouth; and the young man’s hands trembled when he logged in to learn about these two colleges’ final decision. Dartmouth and Harvard both answered: “Congratulations, you have been accepted”.

“I’m going to Harvard!” Ozzie screamed louder than ever in his entire life!

The first call was to his mother, who managed to enter the United States legally one year ago. Her husband continues to wait for approval down in the Yucatán.

Eva Vázquez was at a bus stop on Wilshire Boulevard, one of the principal east-west arterial roads in the Los Angeles metropolitan area, on her way to work as a cashier at a discount store near MacArthur Park, when her phone rang and she picked it up…

“Mommy,” Ozzie said when she answered her phone. “Guess what,” he said before “releasing” the news. “I’m going to Harvard!”

“I was so excited that I started yelling and screaming at the bus stop, I wanted to run like crazy, but I knew I had to go to work. Tears were rolling down my cheeks while on the bus, and people were looking at me like, what’s going on with this woman?” Eva said.

Eva was still euphoric when she arrived at work, and her boss thought she was distressed. However, when she told him about her son being accepted to Harvard, the foreman told everybody and all the collaborators and even the customers started applauding and congratulating her.

The Yucatan Times Newsroom with information from LA Times