CDMX. (Agencies) – During the presidential election, Morena had a 50% acceptance by the Mexican population, six months later, now stands at 32%, according to Arias Consultores and other profesional research agencies, Morena and AMLO have lost strength in the first quarter of the year.

In an interview with Pascal Beltrán del Río for Imagen Radio, Luis Octavio Arias, the director of the company, reported that Mexicans still do not identify with political parties.

In the case of Morena, during the presidential elections it had an acceptance rate of 50 percent, and now stands at 32 percent, “Morena had 50 percent of the electoral political preferences in the election of the president of the Republic, now it has 32 percent and we did not expect such a big rejection, where 30.7 percent consider Morena to be the worst political party, of course, it does not beat the PRI which has 43 percent of rejection,” revealed Arias.

At the national level, however, indifference toward political parties stands at 38.6 percent. 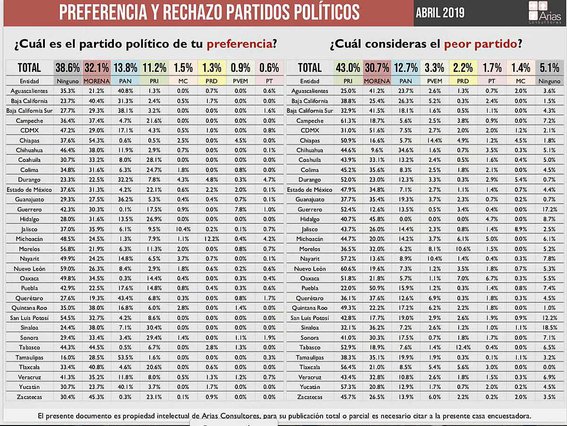 AMLO.
In January, president Lopez Obrador approval rating was 65.6 percent, his highest point. In contrast, the disapproval of his performance has risen from 22.6 percent in December, to 26.9 percent in January, to 33.8 percent in March, reaching 44.4 percent in the most recent exercise. That is, after the first five months of his administration, the president has almost the same percentage of approval as disapproval, according to Arias Consultores. 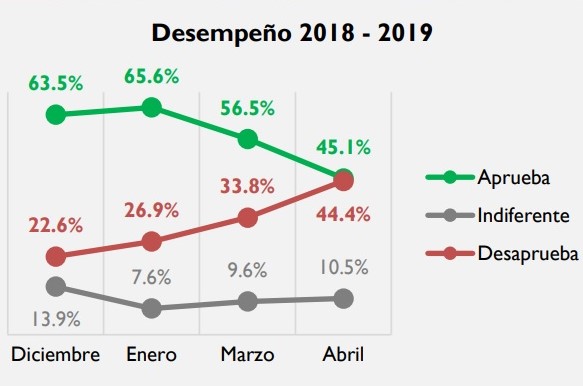 The interesting thing about this information is that it coincides with another poll conducted in recent days by “De las Heras Demotecnia,” the company that also published the six-month evaluation of the government headed by Andrés Manuel López Obrador.

You can read the full report here