This law is equivalent to extending a permit to occupy, invade or not pay rent in any privately-owned housing building in favor of anyone who declares himself incapable or dissatisfied with paying rent and has to face a judicial eviction.

On February 8, 2019 Mexico City published the “Mexico City Constitutional Law on Human Rights and its Guarantees” in the “CDMX Gazette” a law promoted by congressman Temístocles Villanueva from leftwing party MORENA, which attacks the basic concept of private property and private investment in Mexico City. In this new law, evictions were annulled for those who DO NOT pay rent on a house, piece of land or apartment.

This law allows people to refuse to pay rent without suffering any consequences and it allows for the virtual freezing of rent in the country’s capital.

According to Article 60 of the law it states:“In order to prevent forced evictions or launches from violating, among other rights, the right to adequate housing, they may be carried out only in exceptional cases. Before being evicted, the people who will be evicted will have the right: not to be discriminated against, to study all other possibilities that allow avoiding or minimizing the need to resort to force, the due compensation in case of being deprived of property and suffering immaterial losses (sic), and to have due process guarantees” (literal translation.) 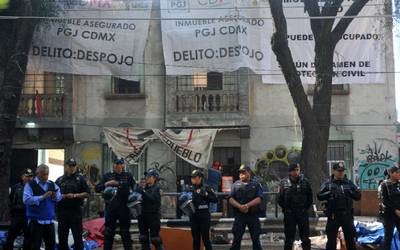 In summary, the law protects the renter and charges the landlord with all consequences of non-payment by the lessee. There will be no way to remove those who refuse to pay the rent except by lengthy court procedures.

This law institutionalizes, under the umbrella of ‘human rights’, the freezing of rents in Mexico City. Under the guise of ‘Human rights’ the state has limited the rights of private parties to settle real estate disputes.  It will no longer be a crime to withhold payment of rent to the owner who rented a property in good faith. The protection of the law will only be for the delinquent renter.

While this is an ideological issue the law promotes theft of property by  advancing the argument that a citizen has the right to decent housing.

The tenants who refuse to comply with their obligation to pay rent, in the worst case scenario, should receive “due compensation in case they are deprived of property or suffer immaterial losses,” says the Law published last February 8 in the “Gaceta capitalina”.

This law is very similar to the Caracas Real Estate Housing Lease Law, which makes evictions practically impossible and has reduced the rent of houses and apartments to zero.

In Mexico City, this is a very hard blow that has gone almost unnoticed at national and international level and it seriously damages the CDMX real estate industry.

This law is equivalent to extending a permit to occupy, invade or not pay rent in any privately-owned housing building in favor of anyone who declares himself incapable or dissatisfied with paying rent and has to face a judicial eviction.

The coordinator and vice-coordinator of the PRD, Jorge Gaviño Ambriz and Victor Hugo Lobo Roman, maintained their demand to end these confusions or attempts to abuse citizenship by Morena and with the other parties, the derogation of this law.

PAN Congresswoman Margarita Saldaña Hernandez alleged that the repeal “is no longer possible,” due to legal terms, but the law can be “adjusted”. In an interview, she explained that article 60, related to evictions “maintains an ambiguous hypothesis and makes this law collide with the human right to property, possession and the administration of prompt and expeditious justice” she said.

Today, Ciudad de Mexico Congress will try to repeal the law… However MORENA party has a majority.

Welcome to the ideology of the ’21st century socialism’ that is so dear to an important sector of López Obrador’s government, political party and members of its infamous “4th Transformation” and this fateful coup against private property. Be careful… This is taking the form of a law and could happen nationwide.

Do you think this is what so many Mexicans voted for? Your call.