MEXICO CITY (AP) — Seventeen black, bulletproof Chevrolet Suburbans stretched in a neat, polished row outside the onetime official residence of Mexico’s presidents. Nearby stood a 2007 Lamborghini Murcielago and a 2016 Ford Shelby pickup truck with a video camera embedded in the front grill and a hand-held radio next to the driver’s seat.

All were put up for auction Sunday by the Institute to Return the Stolen to the People, the new name for a branch of the Finance Ministry that is in charge of selling property seized from purported drug dealers and tax cheats as well as government vehicles and other property that is no longer in use.

Holding the auction outside Los Pinos, a mansion nestled on an edge of the capital’s Chapultepec Park, carried extra significance since President Andrés Manuel López Obrador turned the once heavily guarded compound into an open cultural center when he took office Dec. 1.

Ricardo Rodriguez Vargas, head of the institute, said the goal Sunday was to raise 30 million pesos ($1.5 million) from the sale of 82 vehicles. The money is to be sent to two poor communities in the southern state of Oaxaca to improve roads, schools and other infrastructure. Those municipalities were chosen because almost all their residents live in poverty, he said.

Some of the vehicles put up for sale had been collecting dust in government warehouses for 10 years.

It was the most heavily attended auction in the history of the Finance Ministry, Rodriguez said, with 800 people registering to bid. For every person sitting in the auction area under the shade of a white tarp there were at least another five outside ogling the vehicles, taking selfies with their favorite cars or watching the bids rise from beyond the cordoned auction pit. 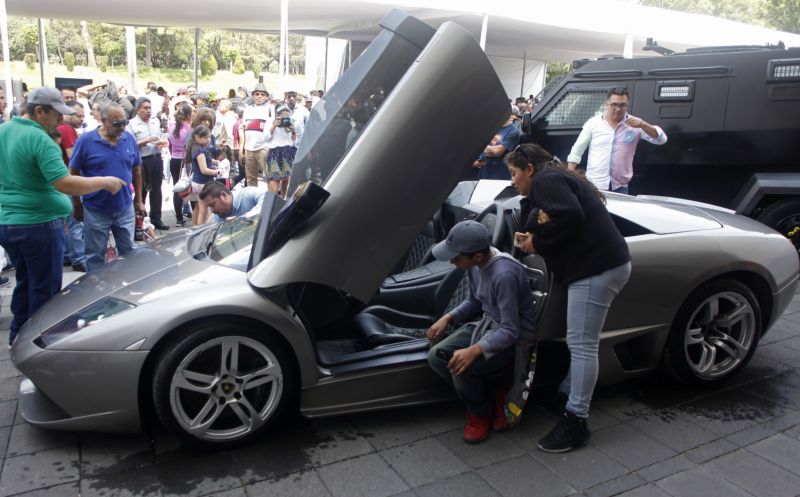 Holding the auction on the grounds of the former presidential mansion was symbolic, said Ricardo Alvarado, a researcher with Mexicans Against Corruption and Impunity, a watchdog group. “Using a space that’s characteristic of the luxury of past administrations is without a doubt a symbol of what this government intends to do with austerity,” he said.

López Obrador has slashed government salaries, including his own, and aggressively trimmed budgets. He plans to sell the presidential jet and travels on commercial airplanes, wears a Timex watch and claims to own fewer than a dozen suits. He is also targeting corruption and theft of state-produced gasoline.

The armored Suburbans, many of which were at least a decade old, drew little interest from bidders Sunday, but the competition was fierce for three classic Volkswagen sedans — the original Beetles — as well as for pristine Audi and BMW hatchbacks with leather bucket seats. Muscle cars, such as an orange Corvette and canary yellow Chevrolet Camaro, also saw intense bidding.

Men in fluorescent yellow vests floated between bidders, yelping like Mariarchi crooners as offers got loftier and loftier. Red auction paddles soared in the air, encouraged by a moderator in a little black dress who seduced buyers with warnings like: “Don’t let it go!”

The top seller was the cherry red Shelby pickup with a license plate from the northern state of Sinaloa, home to one of Mexico’s most brutal drug cartels. The fully loaded monster truck, a virtual office on wheels with leather seats and oversized side-view mirrors, went for 1.9 million pesos ($99,685).

Several would-be buyers, though, told The Associated Press that the vehicles were going for above-market prices. Eduardo Aburto hoped to snag the 2004 special edition Volkswagen Beetle —one of the last ever produced— for the equivalent of $7,500, but the little beige Beetle went for $17,000.

Alejandro Santana, a luxury vehicle mechanic, traveled from the northern state of Durango with hopes of winning a bargain price Mini Cooper or pickup. He left empty-handed, describing the winning bids as “very high.”

Tania Arenas, a researcher at a public university, also watched with dismay as prices soared past her budget ceiling on several vehicles.

“The price starts to shoot up in the first seconds — they rise too much,” she said with incredulity. Nonetheless, she credited the highly visible event with providing voters with proof that the government is raising money and putting it to good use.

Bonifacio Rodriguez Correa, a farmer in a cowboy hat, traveled two hours by bus from what he described as a “forgotten” ranch in central Mexico just to feast his eyes on the vehicles. “I don’t have any money,” he confessed, adding that if he did, he would have bid for a hardy VW to help in his corn fields.

He was overcome with emotion, though, when he talked about this display by López Obrador.

“I cry because I’m happy,” Rodriguez Correa said. “I have a lot of faith, a lot of confidence that he’ll get us out of this quagmire. He’s a man who does what he says.”