What do Juan Manuel Santos, from Colombia; Rigoberta Menchú Tum, from Guatemala; Lech Walesa, from Poland; Frederik Willem de Klerk, from South Africa; José Ramos-Horta, from East Timor, and Lord David Trimble, from Northern Ireland have in common?  Well, the six of them are Nobel Peace Prize winners!  And they have already confirmed their participation in the World Summit of Nobel Peace Laureates to be held in Mérida, Yucatán next September.

For almost two decades the Permanent Secretariat of the World Summit of Nobel Peace Laureates has had the privilege of serving to amplify the inspiring messages of the Nobel Peace Laureates and Laureate Organizations. The leaders and citizens of Rome, Paris, Berlin, Warsaw, Barcelona, Hiroshima and Chicago have hosted Summits with open arms and hearts, and now it’s time for Mérida, Yucatán to show the rest of the world why is this city known as one the most safe and hospitable in the planet. 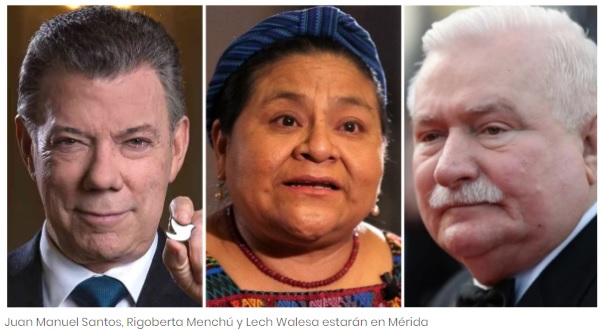 On Thursday May 9, the governor of Yucatan, Mauricio Vila Dosal, at a press conference in a Mexico City hotel, said that the central theme of the 17th edition of the World Summit of Nobel Peace Laureates will be: “The construction of global peace starting from the local “.

“The central axis of this summit is the construction of global peace from the local, specifically the idea that not only large institutions, organizations or national governments can make an effective contribution to global peace but, in accordance with the trends of the 21st century, this construction of tranquility and harmony can be made from the local, from our families and our everyday activity. Every day, all united and in all possible ways, especially from our personal contribution,” the governor added.