MEXICO CITY (AP) — A federal labor official told AP on Tuesday May 14, that a majority of Mexico’s union contracts are probably fake, pro-company deals that provide only minimal wages and benefits.

But the unions behind those contracts are so weak they will probably disappear once the country’s new labor reform goes into effect, Assistant Labor Secretary Alfredo Dominguez said.

The labor reform approved in April requires secret-ballot votes to elect union leaders and proof of workers’ consent for contracts.

The overhaul was needed to win approval of the new U.S.-Mexico-Canada trade agreement, which was negotiated to replace the old NAFTA accord. U.S. and Canadian legislators, angered that Mexico lured auto manufacturing plants with low salaries, have demanded that Mexico change labor laws that encouraged wages as low as $1 or $2 an hour at some plants.

While the rules are an improvement, many critics of the current system worry that old-guard union leaders will try to protect their dominance of the labor movement. Dominguez, however, predicted that many of the leaders will simply disappear.

“Our understanding is that many of the protection contracts don’t even have a real union behind them,” he said. “We think there are (union) representatives who are just the friends or relatives of some lawyer or company owner, and they’re probably going to fall of their own weight, so to speak, because they have no real life as a union.”

The old system, in which union leaders often belonged to the old ruling Institutional Revolutionary Party, was so antiquated and slow that workers’ complaints often took four or five years to be resolved. 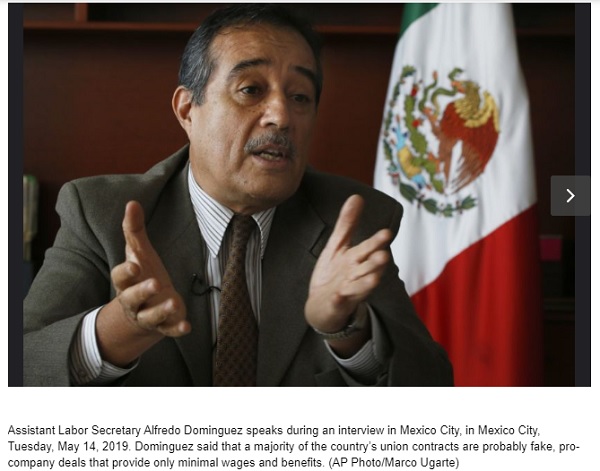 “By the time they are resolved, many of the judgments against employers can’t be enforced. … They have taken so long the companies named in the complaints no longer exist,” Dominguez said.

While Dominguez expects wages to rise, he said he doesn’t foresee a new wave of wildcat strikes like the ones that hit about four dozen export plants in the border city of Matamoros in January.

“There may be more strike notifications, but because we have set up clearer, fairer, more flexible rules … we are betting these will be resolved through agreements,” he said.

The Matamoros strike movement has been criticized because outside labor lawyers and activists got involved. Dominguez said labor solidarity and advice from outside union activists would be allowed under the reform, but not direct participation in strikes or negotiations.

At the same time, he said, the government doesn’t favor using police to try to break wildcat strikes, as happened on a couple of occasions in Matamoros.

“We feel that in many cases the use of force, far from helping, is actually counterproductive,” he said.