MÉRIDA.- With 15 votes against and 9 in favor, the local Congress of Yucatan rejected the draft opinion to reform the Constitution of the state of Yucatan in terms of marriage between people of the same sex.

On Wednesday April 10th, the vote was held in the plenary session, after the opinion was approved by the Constitutional Points and Governance Committee on Tuesday April 9th, where it obtained the majority of votes for its analysis and possible approval, which in the end was not achieved.

From the early morning hours, the Chamber of the Plenary was packed by members of several citizen groups, for and against this initiative that had eight years waiting to be analyzed by the local legislature.

In total there were 24 votes out of 25 possible, since representative Katia Bolio from the PAN political party, was not present at the session.

In the end, there were 15 representatives who voted against the inititative, but their names have not been made public, since in an unpublished event the decision was made by secret vote, due to the controversy that this proposal triggered among citizens in the state of Yucatán.

The legislators argued that they had to take care of the security of each and every representative, so they could vote freely, without tension of any kind, due to the constant pressure of different citizen groups, who were in favor and against the amendment of Article 94, which establishes that in Yucatan, only heterosexual couples can get legally married. 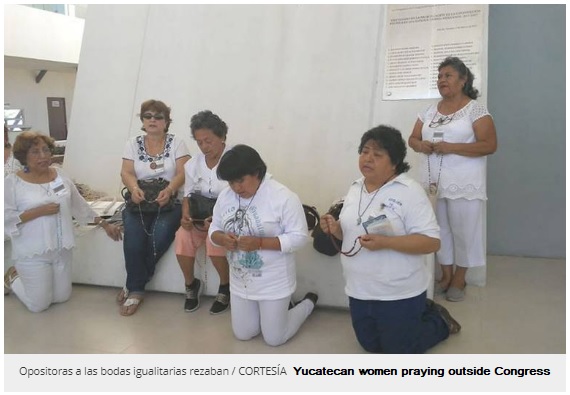 A group of Yucatecan Catholic women spent hours at the premises praying for the initiative to be revoked, it seems like their prayers were heard.

TYT Newsroom with information from Notimex