Mexican culture is one of the most internationally appreciated, reason why once again, it will play an important role in a boxing world championship match, next Saturday May 4 between Mexican Saul “Canelo” Alvarez and Daniel “Miracle Man” Jacobs from Brooklyn, New York,  at the T-Mobile Arena in Las Vegas.

The winner of this bout, will have the honor to take home with him the magnificent “Maya Belt”, made by Mexican artist César Menchaca. This work of art highlights the Maya god Kukulcán (feathered snake), the piece features images made with jade on a base bathed in gold.

The belt honors the Maya culture, and was presented for the first time in Mexico City, in an event attended by Mauricio Sulaiman, president of the World Boxing Council; Ana Gabriela Guevara, head of the National Commission of Physical Culture and Sports (CONADE); and Carlos Padilla Becerra, president of the Mexican Olympic Committee (COM); along with other Mexican boxing legends.

“What was once just an idea, today is a reality. It is a great satisfaction to know that this commemorative belt will position Mexico and its spectacular culture in the top of mind of all boxing fans around the world,” said Sulaiman.

The president of the World Boxing Council declared that the Middle weight uification championship fight will be a great battle between two excellent boxers with different styles.

“It is going to be a very interesting fight, Jacobs has strength, power and dedication, and Canelo is a fine, offensive and very fast fighter, whoever imposes his style, will surely win,” Sulaiman added. 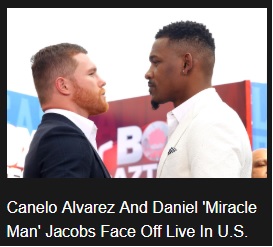