While AMLO proposes refineries, Costa Rica commits to get rid of fossil fuels by 2050

In February, the 39-year-old president of Costa Rica Carlos Alvarado Quesada, committed to ridding the country of fossil fuels by the year 2050. If successful, Alvarado’s plan could make Costa Rica the first zero-emissions country in the world; while Andrés Manuel López Obrador is proposing to build refineries instead.

With a population of merely 5 million, this leafy Central American nation is not a major contributor to the world’s climate crisis. So why bother then? “People ask me a lot, why do this if you are so small,” President Alvarado said in a meeting last week with editors at WIRED’s San Francisco office. “They say, you’re not going to move the needle or affect the scale of the problem.” China, the US, and India hold the dark distinction of leading the emissions charts, and the top 10 emitters account for almost 70 percent of greenhouse gasses. Costa Rica’s emissions barely register in the global carbon belch-athon that’s throwing the climate into disarray.

But Alvarado—who studied journalism and published three novels before assuming the presidency—views the situation the way a writer might. He talks of the importance of stories in shaping human behavior. “What I believe we lack, to some extent, is one of the strongest drivers of humankind that we have,” he says. “That is narrative. Framing.” Costa Rica can be an example of what can be done, he contends, a success story to contrast with the bleakness of climate projections. 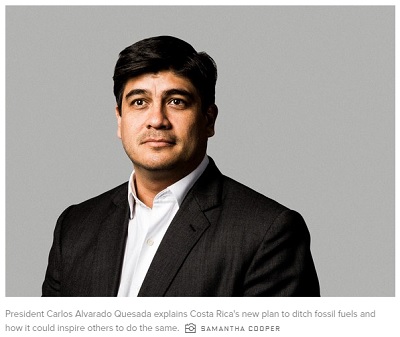 “That may sound romantic, but I’m being very pragmatic, actually,” he adds. “Because we need to take action.”

To reach the goal of limiting global warming to 1.5 degrees Celsius, as hammered out in the Paris Agreement, the world will have to drastically reduce its emissions. No major economy has figured out how to completely get there. According to the Climate Action Tracker, an independent research consortium, even Costa Rica’s current policies are insufficient. If every country adopted Costa Rica’s level of ambition, the world would cap its warming at 2 degrees C.

Yet the tracker also notes that Costa Rica is one of the few developing countries to set unconditional targets for reducing its emissions. New policies springing from the president’s commitments could nudge Costa Rica from a “yellow” on the Climate Action Tracker’s color-coded scaleto a bright green “Role Model” rating. (Fun fact: The tracker rates only two countries as being compatible with a 1.5 degrees-of-warming world. Quick, take a guess—bet you didn’t come up with Morocco and the Gambia!)

For most countries, emissions reduction begins with the electric grid. Not so for Costa Rica, which already has 99.5 percent of its electricity coming from renewable sources. Its abundance of rivers and rainfall allows it to rely heavily on hydroelectric dams; a smattering of geothermal, wind, and solar power installations make up the rest. Electricity was the easy part, accounting for only 30 percent of the country’s energy use.

That clean electricity is the foundation for Costa Rica’s next phase of carbon reduction. The most aggressive action the country can take is to wean its transportation sector off of fossil fuels, primarily by switching to electricity. Initial projects on Alvarado’s agenda are two new electric trains, one for commuters and one to transport cargo. Tax relief on imported electric cars already exists to help incentivize those vehicles’ purchase. Traditional buses will eventually be replaced with ones that can run on biofuels and other fossil fuel replacements.

There’s more to the zero-emissions plan, of course, but the details get vaguer. “To be straight we don’t have the fix yet,” Alvarado says. Who will pay for the upgrades, how to make the process equitable for all citizens: Those are questions to debate and solve in the future.

Alvarado brings the conversation back to the topic of scale—the small scale of his country versus the enormity of the climate change challenge. He thinks perhaps it is a mistake to focus so heavily on the actions of countries and their leaders, as tends to happen. The answer might lie instead in mobilizing smaller constituencies—Costa Rica-sized constituencies, say.