Baja California, the least peaceful state in Mexico, surpassing Guerrero, Colima, Quintana Roo and Chihuahua, which make up the list of the five most violent states.

Brussels: The economic impact of the violence in Mexico increased 10% in 2018, the year in which Baja California became, for the first time, the country’s least peaceful entity, according to the annual report of the “Institute for Economy and Peace” (IEP). The level of peace deteriorated at the national level by 4.9%.

The Peace Index Mexico 2019, which has been prepared for six years by the IEP, states that the cost of violence last year reached 5.16 billion pesos, equivalent to 24% of the national GDP or 41,181 pesos per capita, more than five times the average monthly salary of a Mexican worker. 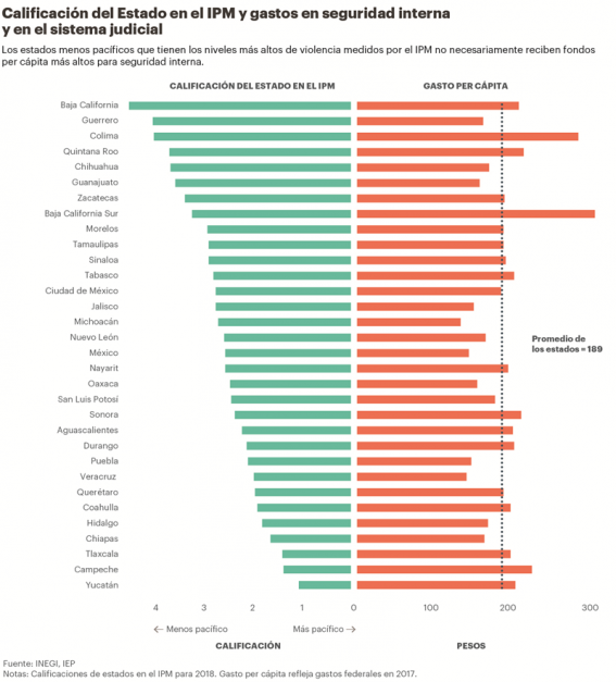 The indicator that most contributed to the economic impact of the violence was homicide, whose rate increased 14%, exceeding 27 deaths per 100,000 people, the highest level recorded. It is the third year that the level of peace has fallen, according to the report.

Crimes with violence also climbed, 25% from 2015 to 2018, the crime rate of organized crime, 11.6%, as well as cases of extortion and drug retailing.“The cost of lost opportunity is high: reducing violence throughout Mexico to the level of its five most peaceful states would generate a peace dividend of 2.5 billion pesos a year, or 10 billion pesos over a period of four years,” the report says.

Baja California is now amongst the least peaceful state in Mexico, with Guerrero, Colima, Quintana Roo and Chihuahua, which make up the list of the five most violent states.

The entity fell 5%, mainly due to a considerable increase in its homicide rate and “ranks in this position by a wide margin, since the next less peaceful state, Guerrero, has a 10% better rating.

The Yucatan Times with information from: The Peace Index Mexico.