Molcajete, a cultural heritage that gives unique flavor to the Mexican cuisine

The molcajete is still a fundamental part of our Mexican identity and culture; we could say that this pre-Hispanic object is a basic kitchen utensil in almost every Mexican home.

According to the National Institute of Anthropology and History (INAH), the term “molcajete” comes from the Nahuatl words: mollicaxtli and temolcaxitl, meaning “mortar for salsa” or “stone mortar for mole“. Although in the Dictionary of the Spanish language it is stated that the term comes from the word mulcazitl meaning “bowl”. Origins of the molcajete

The molcajete is nothing but an ordinary large-size mortar made of stone, mainly volcanic, which is carved in a concave shape and in which spices, grains and vegetables are crushed or ground in small quantities.

To date there is no blender or food processor that achieves the same flavor and consistency as the molcajete, so that is why it is very appreciated throughout the country.

This type of mortar has been used in the preparation of food since pre-Hispanic times, and in its origins, these cavities used to be carved as a hole on a rock, in order to grind corn and other nuts in it. With the tejolote or molcajete stone, chili peppers, salt, garlic and tomatoes are crushed.

Archaeologists claim that the first thing that was used was the metate with a similar purpose, but over time it evolved into this “bowl shaped” mortar.

The existence of the molcajete has been known for about one thousand years and its appearance has not changed one bit ever since. More than just a tool to grind, the molcajete has given a unique touch to Mexican food.

For the elaboration of a molcajete the artisan rounds the volcanic stone with strength, love and tenacity.

Villages like San Salvador el Seco and Comonfort in the state of Guanajuato are specialists in the elaboration of such beautiful kitchen utensil that gives a special flavor to Mexican salsas and stews. The volcanic stone with which the molcajete is made, mostly comes from the town of San Lucas Evangelista in Tlajomulco, Jalisco.

The molcajetes are made in Guanajuato, Jalisco, Michoacán, Puebla and the State of Mexico.

The molcajete is worked with a chopper made of wrought iron and to do it first the stone is minced, then the legs are marked with chisel and hammer and then the surface is hollowed out. 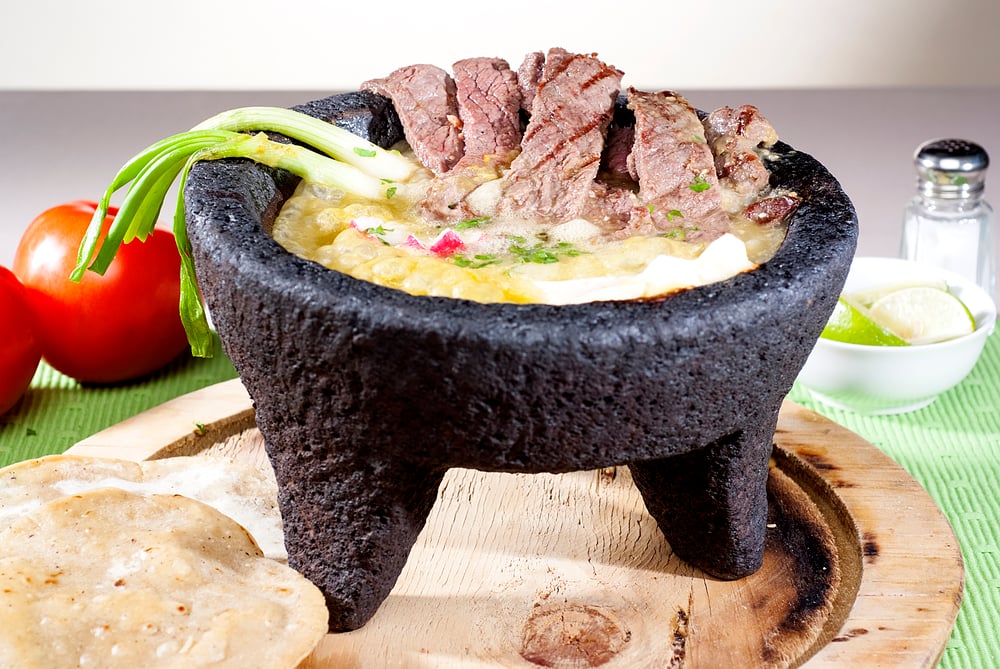 The elaboration of molcajetes is passed from generation to generation, even many young people work in mines to obtain the raw material so that they can learn how to handle the stone.

Master craftsmen take five to six hours to complete the work, while apprentices can take from one to two days.

Before using the molcajete it must be cured; that is, seeds are ground inside it until it is pulverized and rinsed repeatedly until the water is clear.

Once dry, the molcajete will be ready to make a sauce, grind corn, chocolate or piloncillo (brown sugar and be able to prepare delicious moles, or, as it has become a common practice in several restaurants, serve and present meats and seafood in it.

Traditionally, molcajetes are often inherited and pass from hand to hand in Mexican families, and one molcajete can last for several generations. They are a long-time tradition.