The worldwide closures of the Mexico Tourism Board offices left both a void and plenty of speculation as to what the country would do to hold onto its status as one of the world’s leading tourism destinations. Miguel Torruco Marqués, Mexico’s Secretary of Tourism, sat down with world renown Tourism News Outlet TravelPulse to explain the new strategies.

Tourism currently represents 8.8 percent of Mexico’s GDP with an estimated 43.3 million international visitors for 2019, an increase of 4.7 percent over the previous year. This year, however, the Ministry of Tourism (Sectur) will be working without functioning marketing and promotion offices abroad for the first time in nearly 20 years.

According to Torruco, the Ministry will maintain these positive growth trends with a hands-on approach that is also in line with the new President’s closely held values of government austerity and social reform.

“We’re looking at a very different way of doing things, a completely new tourism policy,” he stressed. “We’re going to do this in several phases. We have already solved Tianguis [trade show] financing for the next five years, as well as 52 fairs where there will be no cost to the public treasury. There’s a presidential policy of saving, of Republican austerity, because we must have the resources to have the support of the local population.”

Tourism will now become an instrument of integration and social reconciliation that will not only address the needs of the citizens living and working in the country’s top 14 tourist areas but will also improve their quality of life, serving to lessen insecurity and safety concerns.

“In Acapulco, we are investing $6 billion pesos in infrastructure this year, with the same amount planned for next year, which will go to support new schools, health centers, and more security. It follows that tourism destinations that have happy residents will offer better services and there will be greater harmony,” he added.

“A quiet, hardworking, safe country is the best promotion for any of its tourist attractions. Warnings are eliminated, perception is eliminated, and above all, it initiates the word-of-mouth promotion by visitors for its proximity, the investments that have already been made, and for its many attractions. Very few places offer turquoise-colored beaches where nature has already provided a water heater. That’s an added value in addition to our great historical cultural heritage and gastronomy.”

An important part of Sectur’s social reconciliation tourism strategy includes the creation of the much-vaunted Maya Train, a $1.5 billion peso project that is expected to dramatically boost the economy and tourism in five states: Yucatan, Quintana Roo, Campeche, Tabasco, and Chiapas.

“This will generate a lot of jobs and benefit the 3.5 million tourists who are anxiously awaiting these circuits,” said Torruco. “It will offer vacation alternatives that mix sun and sand with jungles or jungle with archaeological sites.”

One of the current administration’s concerns has also been the need to increase the number of higher-expenditure tourists vs. higher number of visitors in general, even though revenue is predicted to increase 10.6 percent over that of 2018.

Enter Operación Toca Puertas (Operation Door-Knocking), a market diversification strategy Torruco used successfully during his tenure as Secretary of Tourism for Mexico City. “We must promote, create and disseminate our products better,” he said. “We are interested in specific market niches. [Operación Toca Puertas] consists of going directly to countries that are interested and have strong outbound tourism.”

The first approach was with China, which has 22 million high-income citizens. Sectur has already been working with high-end tour operators in that country, who have shown a marked interest in Mexico’s offer.

“We are in no way abandoning the United States or Canada, which together are responsible for 72.5 percent of the tourists that visit our country—last year that number was 41.5 million visitors,” said Torruco. “We are going to continue to visit tour operators in the top cities of origin for travel to Mexico that have been loyal friends of Mexico. We’ll be meeting with the most important tour operators.”

“We will also be meeting with travel agents, but now we’ll be accompanied by the tourism secretaries of the states that appeal to their particular interests. We’ll be putting the offer together with the demand: we will travel with the providers in case [agents] need contacts in the different destinations, in most cases with executives from the airlines. This way the secretaries [of tourism] can present their products, their audiovisual, and their content.

Agents will also have a more immediate link to Mexico’s information and attractions via a revamped VisitMexico.com website.

“The Visit Mexico page is one of the most visited [in the world], second only to Australia’s,” said Torruco. Through strategic alliances with seven international channels—which will generate the revenue needed to support the site—, the portal will feature quality videos linked to specific providers that will advertise their tours and services in great detail, allowing agents and travelers to select what they need for their particular vacation.

Sectur recently signed an agreement with the Ministry of Foreign Relations for the latter to become their promotional arm abroad. “We will soon launch a series of courses on how to attract conventions and how to carry out certain promotional duties that will be of value for ambassadors and consuls general. [This will start] in the main countries of origin for tourists to Mexico.”

“We’ll have the support of the embassies and the consulates around the world and we’ll provide them with information to help us organize the events for Operación Tocando Puertas to benefit promotion,” explained Torruco. 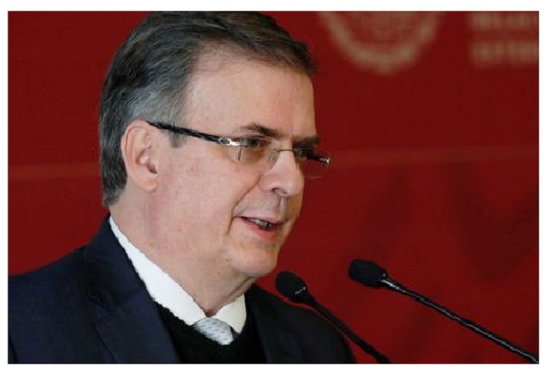 “Mexico continues to be a great option for the United States, for the US market, for travel agents. The investments continue: we [recently announced] that during this Government’s first three months there have already been U.S. $5 billion invested in new construction,” said Torruco in closing.

“This means that there is confidence in President Andrés Manuel López Obrador and confidence in the tourism sector. Little by little everyone will adapt to the new language, to this new form of government that sees tourism first and foremost as an element of social reconciliation.”