The senators who will discuss the organic law of the National Guard admit that it is plagued with ambiguities, so they are preparing to make “substantial changes. Some of the legislators consulted by Proceso maintain that “the old military and naval elites are being rewarded”; others express their fear that the new body will end up being a militarized corps endowed with “excessive faculties”… It would be said that for that reason it will be a sort of “Big Brother”. 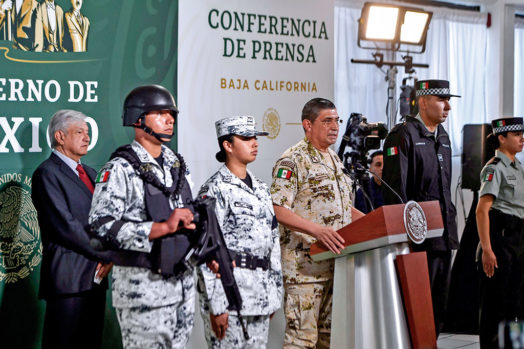 CIUDAD DE MEXICO (Proceso): On federal highways and in airports, in customs, border areas, migratory stations, national parks, prisons, airspace, any means of transport of general communication routes… anywhere, the National Guard will be fully monitoring every audio or visual aspect, according to the draft of the regulatory law on the matter that the federal government sent to the Senate.

The National Guard will be able to monitor the public Internet, as well as request, prior authorization from a judge, data on mobile communication equipment in real time; gather information in public places; investigate crimes under the Public Prosecutor’s Office; conduct undercover operations, and participate in arrests, according to the document.

On Thursday 11, the head of the Secretariat of Security and Citizen Protection (SSPC), Alfonso Durazo Montaño; the legal advisor to the Presidency, Julio Scherer Ibarra, and the undersecretary of the Interior, Zoé Robledo, delivered to the House of Senators the bills for the operation of the new armed corps: the National Guard Law, the National Law on the Use of Force, the National Law on the Registration of Detentions and the General Law of the Public Security System.

The National Guard Law, which regulates article 21 of the constitutional reform, states that the National Guard will be a civil command police institution with technical, operational and command autonomy, attached to the SSPC branch. “It will belong to the Federal Public Administration as a decentralized administrative body,” the proposal says.