#MeTooMen, the male reaction to accusations of sexual harassment and abuse in Mexico

#MeTooHombres (#MeTooMen), is the male reaction to accusations of sexual harassment and abuse through #MeToo in Mexico

After its appearance, hundreds of cybernauts have criticized the movement, labeling its creators as misogynists and “idiots without empathy” but thousands of others support it. 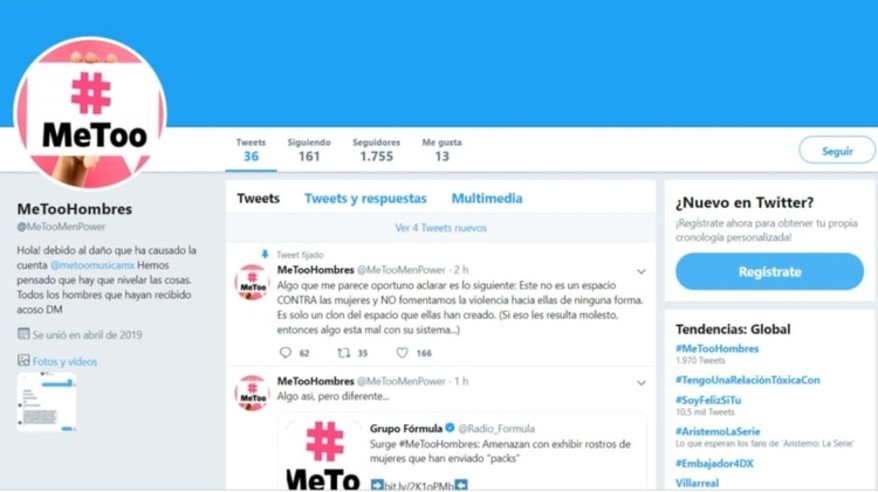 One day after Armando Vega Gil, founder and bassist of Mexican rock group “Botellita de Jerez”, committed suicide after being accused (without presenting proof) of harassing and abusing a young woman, a new Twitter account was created to denounce the sexual aggressions againt men in Mexico, officially opening the movement #MeTooHombres.

“Due to the damage caused by the @metoomusicamx account, we thought it was necessary to level the playing field. Any men who has being harassed DM” can be read in @MeTooMenPower profile, created this Tuesday.

The founders have threatened to spread the identity of women that have harassed or sent pictures of men without having been requested and will attach the identity of the alleged aggressors.  “We will expose your case with the difference that we will show the face of the harasser,” says the message.

They detailed that the photographs will be published from April 3, with the aim of showing all the women who have harassed someone of the opposite sex. In another tuit, they blamed the account @metoomusicamx for the suicide of the Mexican musician, pointing out that they had spread “fake accusations” and gave them an ultimatum of 24 hours to show evidence of the accusation or there will be “a war without quarter”.

Hundreds of people have criticized the movement, labeling its creators as misogynists, however, thousands of other followers support this movement and mention: “it is time stop faceless, anonymous accusations. Those who accuse have to prove their saying”.

Faced with objections, @MeTooMenPower wrote: “If you do it (women), it’s courage and the action of a right. If we do, it’s defamation. We will play with your same rules (We know you won’t like it, but it will be following your same rules)

With this movement, a major battle of the sexes, has just begun.