Dante’s story begins in December 2017, when a xoloitzcuintle puppy was given as a gift to the K-9 Unit of the “Policía Federal” by Mexican Federación Canófila A.C.

Since then, the canine became an emblem for the institution, they watch him grow and be trained, along with 169 other dogs that make up the unit. These animals are trained for guard, protection and search.

As part of the ceremony for the 30th anniversary of the K-9 Unit, these animals were recognized for their work in national security by Raúl Ávila, Chief of the Federal Forces Division of the PF. The ceremony was held at the mayor’s office of Iztapalapa,

Ávila indicated that the Canine Unit has accumulated countless success stories for its technical capabilities, both nationally and internationally, as in the case of the earthquakes in Haiti and Guatemala. “In detection of human remains, seizure of firearms, counterfeit money, as well as different types of drugs, marijuana, cocaine, heroin, methamphetamines, psychotropics and fentanyl, the latter being the most dangerous drug of recent design,”(SIC) added Avila.

The history of this police squad dates back to 1989, when it began its formation, having among its members dogs from breeds such as German shepherds, Belgian Malinois´  and Dutch shepherds.

Dante, received his name from an online contest. He received training in search and rescue so he could help in case of natural disasters. In this sense Ávila revealed that the collaboration with the United States through the “Merida Initiative” boosted and strengthened the capacities of the K-9 Unit with donations of materials, equipment, canine sensors and training.

A clear example of this is the capabilities that Dante acquired throughout his training, which allows him to offer the corporation a service identical to that of his fellow dogs. 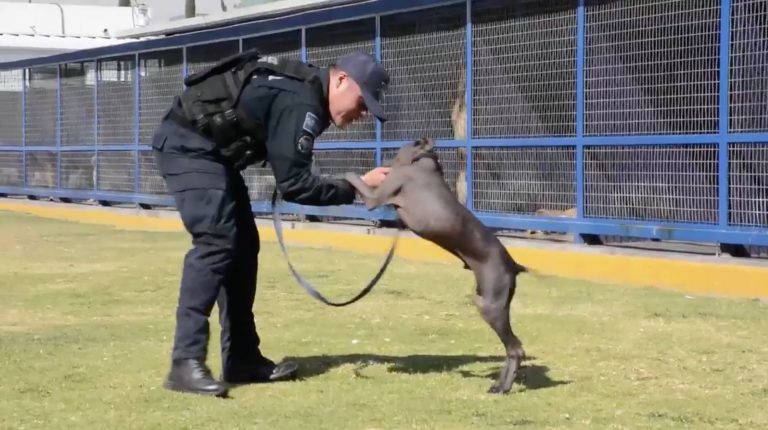 Likewise, it is necessary to emphasize that canine officers retired for years of service or with diminished physical conditions have access to a dignified retirement, as they are adopted by people who meet very specific requirements.

Xoloitzcuintles.
The xoloitzcuintles are originally from Mexico and are declared a “Cultural and Symbolic Heritage” of the country. It is believed that the race is more than 3000 thousand years old and in the Aztec cosmovision they had the function of accompanying and protecting the deceased.

For a long time it was believed that the race disappeared; however, during the 1950’s, the Faculty of Medicine and Zootechnics of the UNAM located the last descendants of these dogs on the Pacific coast and began their formal reproduction.