Journalist unveils secret meeting in U.S. on “use of military force in Venezuela”.

WASHINGTON (Agencias).- “A group of experts from the U.S. think-tank Center for Strategic and International Studies (CSIS) organized a secret meeting earlier this week on the “use of military force in Venezuela,” U.S. investigative journalist Max Blumenthal explained, after publishing an exclusive article on the subject on the Grayzone website the day before.

Blumenthal obtained a checklist of participation in the roundtable called ‘Evaluation of the Use of Military Force in Venezuela,‘ organized by the Washington, D.C.-based center, which includes several U.S. and South American officials and military personnel.

The journalist explained that the secret meeting took place on April 10, this was confirmed to Blumenthal by two of its participants, whom he has contacted for comments.

Members of the Bolivarian National Armed Force on the border with Colombia, mentioned in February 24, 2019 to the President of the Russian Senate: “We are concerned that the U.S. may decide to attack Venezuela”.

Exclusive: DC’s @CSIS hosted a who’s who of Trump Latin America advisors for a private roundtable to discuss waging a US military assault on Venezuela. The meeting included the former head of SOUTHCOM, a Colombian general and USAID & NIC officials. https://t.co/qVlDZ2WdoT pic.twitter.com/fateSAwR0w

Participants
The list of participants brings together several former U.S. and South American military and civilian officials, representatives of the U.S. Agency for International Development (USAID) and the Organization of American States (OAS), as well as analysts from several think tanks. Also in attendance were several figures appointed by the self-proclaimed Venezuelan President Juan Guaidó. Among them was Admiral Kurt Tidd, who until recently headed the U.S. Southern Command.

Another participant was Roger Noriega, a staunch opponent of the Bolivarian Revolution and who as U.S. ambassador to the OAS supported mercenary groups to overthrow the Sandinista Revolution. In addition, like Elliott Abrams, he participated in the Iran-Contra scandal: senior Reagan government officials, despite the Senate’s ban, authorized the sale of arms to the Iranian government during the Iran-Iraq war. They then used the proceeds of these sales to finance the Nicaragua Contras armed movement, created by the U.S. to attack the Sandinista government. For years, he has held senior positions within the U.S. administrations, focusing on Venezuela and coordinating the OAS. 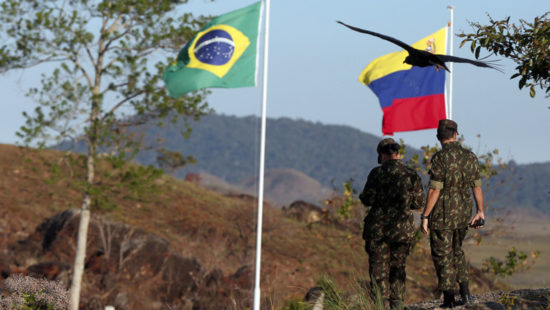 Invasion of Venezuela “would need the consent of Colombia and Brazil.”
Although among the roundtable participants were two Colombian officials: the major general of the Colombian National Army, Juan Pablo Amaya, and the advisory minister of the Colombian Embassy in Washington, Daniel Ávila, the journalist believes that U.S. regional partners would not necessarily be reluctant to participate in a military invasion of Venezuela since: “Both governments are extremely concerned about the increasing migration crisis, but also are deeply concerned about destabilizing the entire region, and that is absolutely what this would imply, also, they are worried about a counterattack by the Venezuelan Army, which is quite competent.” Max Blumenthal concluded.