After years of abandonment by his family, Melchor came to this retirement home on his own will

Don Melchor Rodríguez says that his house in Pacabtún was quite large for him, so he decided to leave the premises, and move to a Retirement Home in Méridal, where he feels fulfilled and loved, as his five children abandoned him long time ago.

With a smile on his face sitting in his hammock, Melchor Rodríguez sees life go by. School teacher by profession and a a book lover, at 72 he enjoys a good chat with friends and loves to watch the birds singing in the park of Santiago.

Melchor arrived at “Jesus of Mercy” retirement home, on his own will, looking only for a friend with whom to chat and share a coffee in the afternoon, anybody that could be interested in his feelings, his health and nutrition.

“I have a house in Mérida’s Colonia Pacabtún, it’s a four bedrooms, two bathrooms and a large garage, but it’s too big for me now. As I suffer from osteoarthrosis and from the prostate, I wake up in the middle of the night to go to the bathroom, with nobody around to help me if I fall down. That’s why I told my half sister: ‘Take me to a place where I can talk with people my age, with whom I can go to the park, to church. And well… that’s how I got here,” the man said. 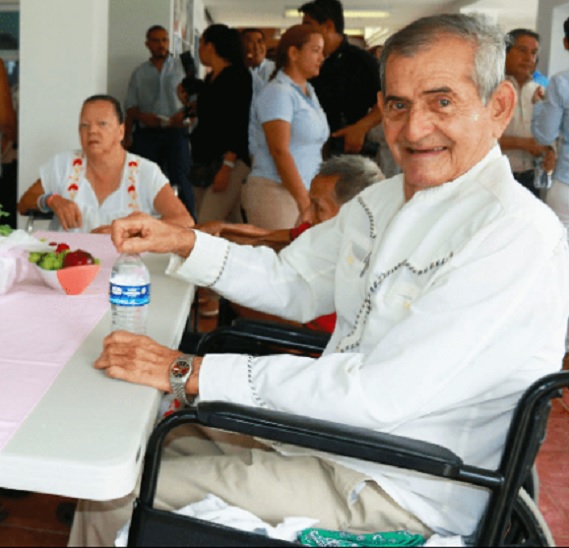 “When you reach a certain age, people leave you. I have five children and grandchildren that I have not seen in years. But here I feel safe, loved and at ease; I enjoy going out to the park, playing dominoes with my mates and even talking about what our lives were like before arriving here. I feel alive and well”. (Melchor Rodríguez)

One afternoon in January, Melchor arrived at the shelter with only one goal, to make new friends and have a routine that could make him feel alive again. Since then, the morning coffee, dominoes, the afternoon dance and a trip to the park to breathe some fresh air, are the “pleasures” that he now enjoys each and every day. Today the man has a new family and 32 new brothers and sisters.

Melchor enjoys every moment he spends with his new friends. He tells them about the time when he used to run his own ceramics company, that he opened years ago along with his partner, and that operated for 19 years nonstop. However, just like his family, age also took his business away from him.

“When I stopped teaching, I opened a company, me and a good friend started a ceramic products store, it was prosperous, but one day it was all over, my partner kept the business, and I left, to stay in my house. I was alone and loneliness is a terrible thing. But thanks to the people in this “Casa Hogar Je´sus de la Misericordia“, I was able to feel loved and appreciated again. And that is something I do not change for anything else in this world,” Melchor stated.

Like him, hundreds of elderly people reach adulthood alone, without family and with depression ahead. According to statistics by INEGI, in Yucatán there are 196,474 people over 60 years old.