VALLADOLID, Yucatan – The effects of the hive beetle, the anticipated flowering of the dzidzilché and the low prices from the collection centers are three of the factors that are currently affecting beekeepers in the east of the state, said Marcos Rafael Chan Cahuich, beekeeper, in an interview with journalist Alfredo Osorio Aguila from Por Esto news. “Every day we go from bad to worse, because as the harvest season approaches, less nectar is collected and that obeys to multiple situations,” the honey producer explained. 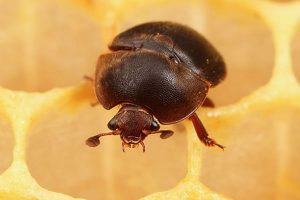 Chan Cahuich referred to the case of the hive beetle (aethina tumida), a species of beetle belonging to the family of nitidulids, a group characterized by its affinity to the products of plants that ferment and associated with the colonies of bees, specifically honey and pollen. Native to Africa and the sub-Saharan region, it has spread thanks to the human activity of beekeeping throughout North America, Australia and recently Europe. It was detected in Tizimín Yucatan and at that time the Ministry of Agriculture and Rural Development (SAGARPA) thought that incinerating all the affected hives would put an end to the disease, thus preventing its spread within the State. However, that action failed.

“Unfortunately, the insect came to stay and to this day continues to affect beekeepers throughout Yucatan. When the beetle enters the hive, it alters the honey by fermenting it, but the worst thing is that it devours the larvae, until the hive dies or emigrates,” he added.

Chan Cahuich, mentioned that for the bad fortune of honey workers to this day there is no substance that can support the fight against the beetle, unlike what happens with the varroa (mites), which in some way can be contained.

The price of honey.
Regarding the price at which the collection centers buy the honey from them, he pointed out that, they are usually badly paid for the product. “That is perhaps the worst impact of all, because even if we have good catchment, if they buy us at a price of laughter, all our work is useless,” he said. 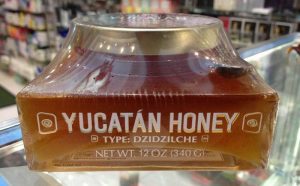 He said that currently the purchase price of honey ranges between $21 and $24 pesos per kilo, when last year that same price closed at a rate of $45 pesos.

Last year there was a lot of honey that could be placed in the market, but something negative was that several beekeepers offered their product as organic honey when in fact it was not, because they did not carry out the proper work practices and could not pass the strict quality controls required in the European Union, specifically countries such as Germany or Great Britain.

Chan Cahuich explained that it is not that the producers do not want to carry out good practices, but because the economic conditions do not allow them. He pointed out: “we can exemplify the case of some processes such as extraction… A stainless steel extractor has a cost of about $20,000 pesos and a drum does not exceed 4,000, the small producer by necessity goes for the economic, but in the long run it affects the quality of the honey.

Referring to the case of the flowering of dzidzilché, he said that generally this should be for March or April, but was advanced throughout the state and was not enough for the production of nectar, so they only had the flowering of the tajonal.

Ending the interview and returning to the issue of the affectation by the intermediaries, Marcos Rafael Chan Cahuich stressed that if beekeepers could see the potential of honey and work with really productive purposes (and not as an extra), conditions might change, because the big companies that are dedicated to this industry, take a systematic work and not like the small producer, who does it in his spare time.

With information from: Por Esto!