“Secrets of the Mayas”: The most amazing moments

The series “Secretos de los Mayas” (Secrets of the Mayans) which is broadcasted on Sundays at 8 p.m. on the NatGeo channel, premiered its second episode on 24 March. In this episode we could appreciate more discoveries regarding the majesty of the Mayan civilization.

The findings seen in each documentary are based on a technology called LIDAR (Light Detection and Ranging), which uses laser light to discover buildings that are underground or surrounded by trees.

The images shown in each delivery are the product of research carried out in the Maya Biosphere Reserve by national and foreign archaeologists between 2016, 2017 and 2018. This project was coordinated by the Maya Cultural and Natural Heritage Foundation (PACUNAM).

RITUALS AND SACRIFICES
The second of four documentaries include images never seen before about the discoveries in different archeological sites of the Mayan Biosphere. In this episode, explorer Albert Lin researched into the world of Mayan rituals and sacrifices. According to experts consulted by NatGeo, LIDAR technology allowed researchers to identify caves with human remains and ceramic pieces.

“Any explorer in the world would be delighted to know this,” said one of the explorers in the documentary, referring to the findings in the caves. It is important to note that the explored site was surrounded by trees, but with LIDAR all the vegetation could be digitally removed. 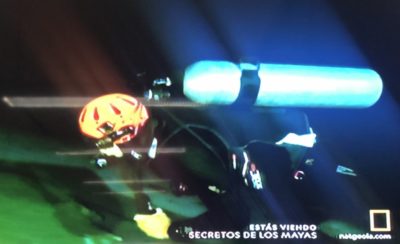 The documentary also explored the Yucatan Peninsula, which has more than six thousand water caves (cenotes). According to the researchers, in these caves rituals were performed for the gods and victims were offered to them.

Archaeologist Guillermo de Anda and his group of explorers put on their divers’ suits and immersed themselves in the waters of the caves, where they were amazed by the depth and the different ceramic remains they visualized. These ceramic pieces were digitally recorded and then placed in their place. “In one dive I found clear evidence of Mayan rituals,” said the explorer.

LIDAR technology also discovered a pyramid that is built on top of a mountain. For archaeologist Francisco Estrada-Belli, this finding is relevant because near the pyramid were found remains of water vessels, which were probably used for offerings during sacrifices. At the site, researchers also found a stele with an inscription. To analyze it, they had to move it very carefully. What they discovered was something that appeared to be a writing. According to the documentary, it is likely that the monument was intentionally destroyed.

Two more episodes are missing. These will be broadcast on March 31st and April 7th at 8 p.m. on the NatGeo channel. Don´t miss it!!!