Ría Lagartos Biosphere Reserve, one of the few places in the world where Pink Flamingos are born

In a statement, the agency dependent on the Ministry of Environment and Natural Resources (Semarnat) said that in 2018 there were approximately 21,960 nests recorded, a historical figure for this reserve.

The pink flamingo or “pink of the Caribbean” is one of the six species of flamingos that exist in the planet, and its color is due to the fact that it feeds on small crustaceans called artemia (its favorite food).

This type of bird lays only one egg per year that hatches after a period of 28 to 30 days. The weight of the adults fluctuates between 2.2 and 2.8 kilograms and they reach a height of 1.40 meters (4 1/2 feet) and 1.50 meters of wingspan. Thes animals require a habitat of  shallow waters with different salt concentrations.

The Conanp assured that a healthy population of flamingos is an indicator that the ecosystem, in this case the mangroves of the Ría Lagartos Biosphere Reserve, are in a good state of conservation. 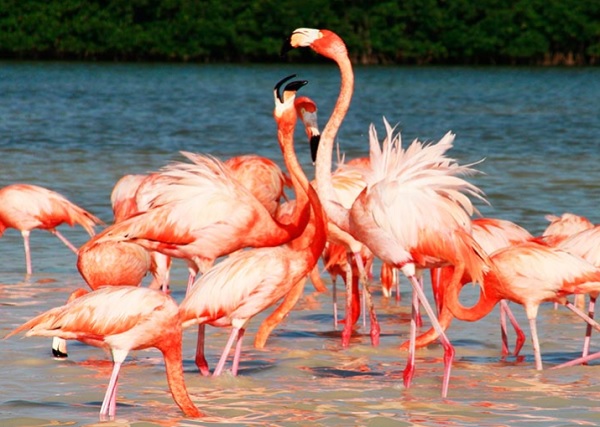 Mangroves are ecosystems rich in biodiversity, since they are the habitat in which the development of early stages of fish, molluscs and crustaceans takes place, and are home to crocodiles, jaguars, coatis, racoons, more than 395 bird species (both endemic and migratory), as well as a great variety of fish.

The Conanp in coordination with personnel of the Pedro and Elena Hernandez Foundation AC, carries out the monitoring and ringing of the birds, through surveillance tours and permanent guards in the nesting areas, and they also prevent any kind of incident that could disturb the colony. In addition, Mexico has established twinning aand international agreements, such as the one between Mexico and Cuba, for the conservation of this charismatic species.

Thanks to the ringing strategies carried out for years by the Conanp in coordination with the Pedro and Elena Hernandez Foundation AC, it is now known that the same population of this species moves and reproduces between Mexico and Cuba.

Currently, the National Commission for the Knowledge and Use of Biodiversity (CONABIO) and the National Commission of Natural Protected Areas (CONANP) are implementing the High Resolution System for Diversity Monitoring  (Sistema de Alta Resolución para el Monitoreo de la Diversidad SAR-MOD) at the Ría Lagartos Biosphere Reserve, and thanks to this system there is now much more useful information that will allow the conservation of the species.

TYT Newsroom with information from excelsior.com.mx