One Yucatecan among victims of the Ethiopia plane crash

By Yucatan Times on March 11, 2019
Aviation authorities are still investigating how a new Boeing plane with an experienced pilot crashed minutes after takeoff from the Addis Ababa International Airport, on Sunday March 10th, killing all 157 people on board. According to the first reports, four of the victims were traveling with United Nations passports, including Graziella de Louis Ponce, from Mérida, Yucatan, Mexico, who worked for the UN. The destruction of Ethiopian Airlines flight ET 302, which was on its way to Nairobi, is the second calamity involving a Boeing 737 Max 8, a new model that experienced a similar accident in Indonesia in October. The largest number of the victims were Kenyans. Seven Britons were also reportedly on the flight, which left Bole airport at 8.38am local time (5.38am GMT). There are concerns that a number of humanitarian aid workers and delegates to the UN Environment Assembly, which starts in Nairobi on Monday, may have been on the flight. The pilot said he was experiencing technical problems and asked to return to the airport. The control tower lost contact with the aircraft at 8.44am. Wreckage was later discovered near the town of Bishoftu, 39 miles (62km) south-east of the Ethiopian capital. The flight tracking website Flightradar24 tweeted that the plane had unstable vertical speed after takeoff. The cause of the accident is not yet known. Ethiopian Airlines CEO Tewolde GebreMariam said routine maintenance had revealed no problems with the plane, which it had received last November, and the captain Yared Getachew had flown more than 8,000 hours with an “excellent flying record”. “As I said, it is a brand new airplane with no technical remarks, flown by a senior pilot and there is no cause that we can attribute at this time,” he told reporters. 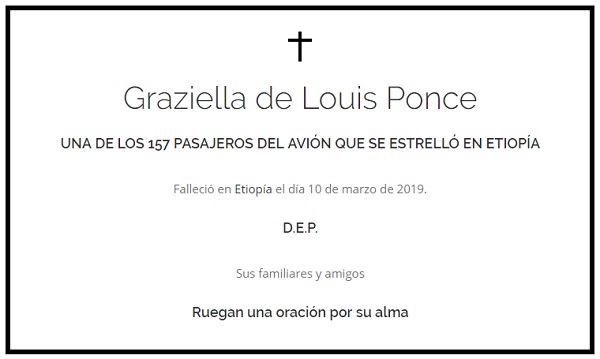 Questions have been raised about the safety of the Boeing 737 Max 8, which has been in commercial operation since 2016. The same model was involved in the Lion Air crash, where a jet plunged into the Java Sea soon after takeoff last year, killing 189 people. More than 300 of these planes are in operation with different airlines. Ethiopian has six more. Asked whether they would be grounded, GebreMariam said no because “we don’t know the cause of the accident”. Source: ROD Noticias