The streets of Antigua are all stones.  Some say cobblestones, but these are not well cobbled.  The city is a World Heritage Site, so it must maintain the old style and flavor of most things here, so they don’t repair the stones with cement to really hold them together.  They use a mixture of gravel and a substance called “cal.”  It is lime, the main ingredient in cement for concrete, but it’s the only ingredient with substance.  It is like using clay for adobe bricks.  It doesn’t have the holding power of the usual cement, but it lasts about a year, it seems.  The streets are in constant repair, but hey, it gives a lot of men jobs. I have observed many a tourist trying to rush across the uneven stones of the streets (because pedestrians do not have the right of way), and fall right in the middle of the road.

Until the last few years there were very few streets signs in Antigua to indicate where you are, and the stop signs for vehicles were so obscure you were in jeopardy at almost every corner.  It’s getting better, a few streets at a time.  Walking the sidewalks, not much better than the streets, is taking your life in your hands:  many are full of holes with missing covers, irregular use of materials, broken surfaces, constant dips for driveways, and pieces of metal sticking up.  To top it off, the colonial architectural style includes having all windows at the street have a window sill:  a cement platform protruding out with iron bars imbedded in it, to create protection for that window from anything wider than 4 inches (10-12 cm) from getting through.  All of us have at least once smacked a head or shoulder on one of these window sills.  It is the colonial style for which Antigua is famous.  But what a charming little city! 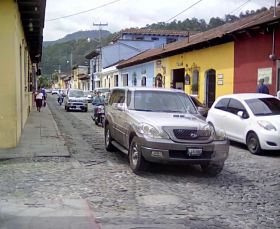 A street in Antigua

If you think about having nine square blocks, not long ones like big cities, and then think about one and a half million visitors to Antigua during the season of Lent leading up to Easter Sunday, you should also try to imagine things like parking.  There are very few parking lots, and parking structures are not allowed due to the zoning restrictions from being a World Heritage Site.  Add to that the many religious processions through the streets during Lent and Easter, Advent and Christmas, and a few other important holidays, it can be very difficult to drive and even walk in Antigua.  More Guatemaltecos in the city now have cars, and they love to visit as well as foreigners.

If you want to meet people in Antigua a great place to start is in the very center of town at the plaza known as Parque Central.  The town is basically about nine blocks square as the area where you would go as a visitor. It is easy to walk to everything from there. The streets running north and south are “avenidas” and those east-west are “calles,” meaning streets.  So if you look at a map you locate the Volcano Agua, which is south, put your back to Volcano Agua and face north, you will find the avenidas begin at Primera Avenida to your right and continue left to Septima (7th) Avenida.  What would be the eighth avenida is called Calzada Santa Lucia, but you have reached the western side of town once there.  The calles start at Primera at the north end of town and increase as you move southward to Noventa. So if you can find some street signs at the corners you can readily use your map, but if not, you will have to count blocks as you walk.  Little by little, more streets signs are appearing, and the stop signs for cars have been improved in visibility.

My friend Deet moved to Antigua 26 years ago from Chicago.  She rides a bicycle because it is much easier on her knees than walking the uneven surfaces of the streets and sidewalks.  She is just now turning 81 years old and has used a bike here all this time.  She rides around town to the market, to friends, to appointments, and to the Parque Central.

Her real name is Judith, pronounced “Hoo-deet” in Spanish, so she is known by most as “Deet.” Many of the extranjeros (strangers, or foreigners) who have located themselves close to Antigua know her.  She can be found almost every morning at Parque Central, chatting with other expats or introducing herself to visitors to welcome them. She parks her bicycle nearby, carrying along whatever she may need that morning in her basket, and always has a supply of her homemade flyers to hand out. The flyer indicates that she will give you a massage in her home, one hour, for a meer 100 quetzals. This is about $13.  She has been doing it for many years, but now that she is older she has to limit her guest’s body weight to 160 lbs., or 72 kg. She was trained years ago in California in the method taught at Esalen, a health retreat on the rocky central coast.  Those were her hippie days.  And though $13 isn’t much to most of us, massage has supplemented her meager Social Security pension which will stretch much further in Guatemala than almost anywhere.

Deet is an interesting, capable, and versatile woman.  She can chat and speak several languages, having been raised in Chicago by parents who spoke German, and she seems to learn language easily, lucky her.  She traveled the world extensively in her younger years, managing about 35 countries. This was after she raised her two children, went back to school for college education, and worked a variety of jobs, not too high-paying. After her husband passed away and her children were established, she was free to wander.  When she came to Guatemala she thought it was to stay a few weeks and learn Spanish, but like many other visitors, she loved it so much she never left.  She manages to get back to the US yearly to see friends, family, and a doctor or two to keep up with health checks. 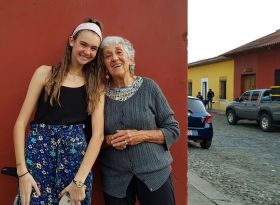 Deet is constantly meeting people and making new friends, finding satisfaction in her skill at connecting people.  Her birthday falls the last day of the year, so she has a party on New Year’s Day for as many as she can get to show up.  During that time she asks her 45 to 70 guests to line up in the yard according to where they are from, starting at the East Coast of the United States, going all the way around the world and back again.  Then you get to meet the people who may be from where you are from, or closest to it.  And she asks sometimes for people to line up by age, or some other category, and it gets everyone meeting new people that they might never have met.  The last lineup then includes photos of everyone so she can have a large print made to remind her of every year and every friend.

Source: BEST PLACES IN THE WORLD TO RETIRE