Trump ignites new immigration furor ahead of State of the Union: CNN

According to CNN’s analyst Stephen Collinson, President Donald Trump is carving new divides on immigration ahead of his State of the Union address that likely offer a more reliable guide to the year ahead than the ritual calls for national unity he is expected to issue on Tuesday Feb. 5.

“With Caravans marching through Mexico and toward our Country, Republicans must be prepared to do whatever is necessary for STRONG Border Security,” Trump wrote in a tweet on Sunday evening.
“Dems do nothing. If there is no Wall, there is no Security. Human Trafficking, Drugs and Criminals of all dimensions – KEEP OUT!”
The Twitter blast shattered the White House spin that Trump is intent on healing old wounds, reaching across divides and using showpiece annual address before a vast television audience to project optimism.
The timing of Trump’s tweet may be no coincidence — it emerged shortly after Axios published weeks of leaked West Wing schedules painting an unflattering picture of a President who spends hours a day in unstructured “executive time.” 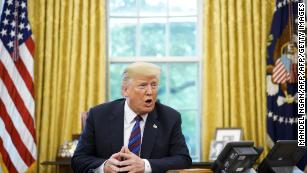 But Trump’s attempts to distract are often instructive since they usually revive the scorched earth style of politics that fired up his grassroots supporters in 2016 and can explain why he has rarely, if ever, attracted majority political support.
That’s one reason why it will be important to watch how Trump behaves before and after his State of the Union address — rather than just the tone of his scripted remarks as he relishes the spotlight of a prime-time television audience.
The obvious political play on Tuesday for a commander in chief who is perpetually underwater would be clear to any other President than Trump.
With his approval ratings dipping after a humiliating defeat over the government shutdown and with the Russia scandal closing in on his White House, a conventional president would stress unity and seek to widen his support.
At a time of jarring national political divides, he might seek to shift to the political center as Democrats move left at the start of their 2020 primary campaign and to position himself to widen the narrow path to 270 electoral voters he navigated in 2016.
Such a president would be sure to spend most of his address on the roaring economy and stress shiny job creation numbers which make the best argument for his re-election. In order to avoid tainting his big moment with partisan jabs, he might steer clear of his hardline views on the most divisive issues. In Trump’s case that might mean softened rhetoric on immigration — since most polls show he has the support of less than half the country on the issue.
But that’s not how Trump rolls.
The President who built a political career on mobilizing a faithful, angry base and deliberately tweaking the nation’s social and cultural divides is unlikely to signal the fundamental change of direction on Tuesday night that his perilous political plight might suggest.
CLICK HERE FOR FULL ARTICLE ON CNN