Over 20 cases of “Chagas” Disease confirmed during February in Yucatán

During the month of February 2019, 24 new cases of the “Chagas” Disease (American trypanosomiasis) have been confirmed in the state of Yucatán.

Chagas disease, also known as American trypanosomiasis, is a tropical parasitic disease caused by the protist Trypanosoma cruzi. It is spread mostly by insects known as Triatominae, or “kissing bugs”, also known as chiggers or by the name of “pic” in the state Yucatán.

During the last week, the Federal Health Secretariat, reported that the cases of  Chagas disease in Yucatan, went from 3 in January, to 27 infections the next month, all in chronic phase. According to the bulletin for epidemiological week No. 6, between the Feb. 3rd and 9th, 24 new cases of American trypanosomiasis, commonly known as Chagas disease, (3 men and 21 women).

Last year, the total number of cases of Chagas disease confirmed in the state was 62 (39 men and 22 women); 61 of these cases were in chronic phase and only one (a male) advanced to the acute phase of the disease.

The upward trend of this disease in recent years, according to the Ministry of Health, is due to the increase in the timely identification of cases due to the implementation of the Prevention and Control of Health Initiative (2014), as well as improving the quality of diagnosis, epidemiological surveillance and access to treatment. 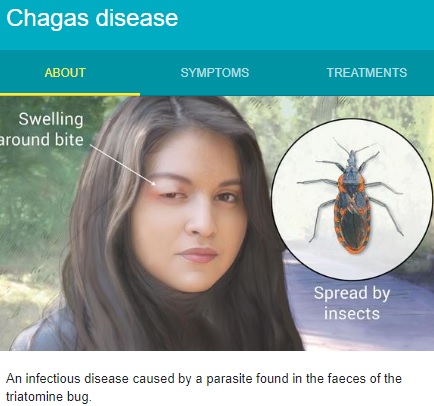 American trypanosomiasis is a systemic parasitic infection caused by the protozoan Trypanosoma cruzi (T. cruzi), which is transmitted in eight out of 10 cases by insect vectors of the genus Triatominae, commonly known in Yucatan as “pic”.

The disease is contracted to a lesser extent by blood transfusion and organ transplantation, congenital and oral.

Chagas disease is common in places where the triatomine bug transmits the parasite Trypanosoma cruzi such as South America, Central America and Mexico.
The disease can be mild, causing swelling and fever, or it can be long lasting. Left untreated, it can cause congestive heart failure.
Treatment for Chagas disease focuses on taking medication that kills the parasite and on managing symptoms.

A characteristic initial sign may be a skin lesion or a bruised eyelid swelling. In addition, other symptoms may be fever, headache, enlarged lymph nodes, pale skin, muscle aches, shortness of breath, swelling and pain.