“Why do you hate us?… Because you’re Mexicans”

According to the Center for the Study of Hate and Extremism at California State University, San Bernardino, anti-Latino hate crime increased 176 percent in major U.S. cities in the three weeks after the 2016 presidential election.

“In the period around election time, the group that saw the highest percentage increase of attacks were Latinos,” Brian Levin, director of the center explained. This tendency has not diminished.

Many people of Hispanic descent can vividly recall that one moment when they heard the epithet “beaner.” Which to Latinos, it happens to be as offensive as the “N” word for people of African descent. As a child or an adult, the word stings. Especially when accompanied by expressions such as: “You’re not American”. “This is America, can´t you speak English”?

These situations are particularly troubling at a moment when hate crimes in general have been rising according to a report from the FBI.

Most major categories of hate crimes —motivated by race or ancestry, religion, or sexual orientation — were reported at higher rates in 2017. Reported anti-Jewish crimes rose by more than 37 percent, pointing to an increase in anti-Semitism, which has gotten more attention after the Pittsburgh synagogue shooting.

Reported anti–Hispanic and Latino crimes rose by more than 24 percent. Reported anti–American Indian or Alaska Native crimes rose by nearly 63 percent — although the number of incidents in these categories was still overall far lower than, for example, anti-black incidents.

Manifestations of hate towards Hispanics.
In  2018, a man and his mother were doing yard work in California when a woman unleashed a diatribe against Mexicans, and — invoking Donald Trump — called them rapists, animals and drug dealers. The encounter was posted on Twitter and has been viewed  by millions of people.

A friend, Esteban Guzman sent me this video of a racist white woman harassing him while out working with his mom.

“Why do you hate us?”
“Because you’re Mexicans.”
“We are honest people right here!”
“Haha..yeah.. rapists & animals.”

In the video, which lasts about 35 seconds, the man — identified as Esteban Guzman — went back and forth with the unidentified woman, who at one point appears to “give him the finger”.

Mr. Guzman told the woman that “we’re honest people.” She laughed and countered with her own impressions: “Rapists. Animals. Drug dealers.” She mentioned the president, who has made similar remarks about undocumented immigrants coming across the border, often from Mexico.

Hehsus Baeza, a bartender at “Tkilaz Mexican Restaurant Bar and Grill” in Midland West Texas was very upset after allegedly finding a “tip note” on a bill, from a customer named Terry Welsch who Baeza claims wrote: “My tip is to build the fucking wall now!” on the bottom of the receipt for $17.55 since the patron apparently dined solo, Newsweek reports.

As evidenced in the image shared to social media, the customer allegedly wrote the inflammatory message on the paper tab for a plate of asado with two tortillas and a XX Lager beer.

Upset by the note, Baeza took to his personal Facebook page to share an image of the receipt.“Fuck you Terry Welsch! How are you going to come eat a plate of asado and drink a dosxx and write this! #hypocrite” the bartender wrote on the social platform, in a post that has over 600 comments and 952 shares. As of today, he has erased his post.
Baeza is said to have replied to requests from local media regarding the incident with the following statement, as per Newsweek. “I’m still taken aback by all this. I didn’t expect this kind of reaction (from a customer)” the man said.

Similar cases.
A few days ago at Charrito’s Bar & Grill in Huntsville, Alabama, a customer left a deliberately racist remark on a receipt instead of a tip. The message read “Brown cunts … Trump will fuck you all.” 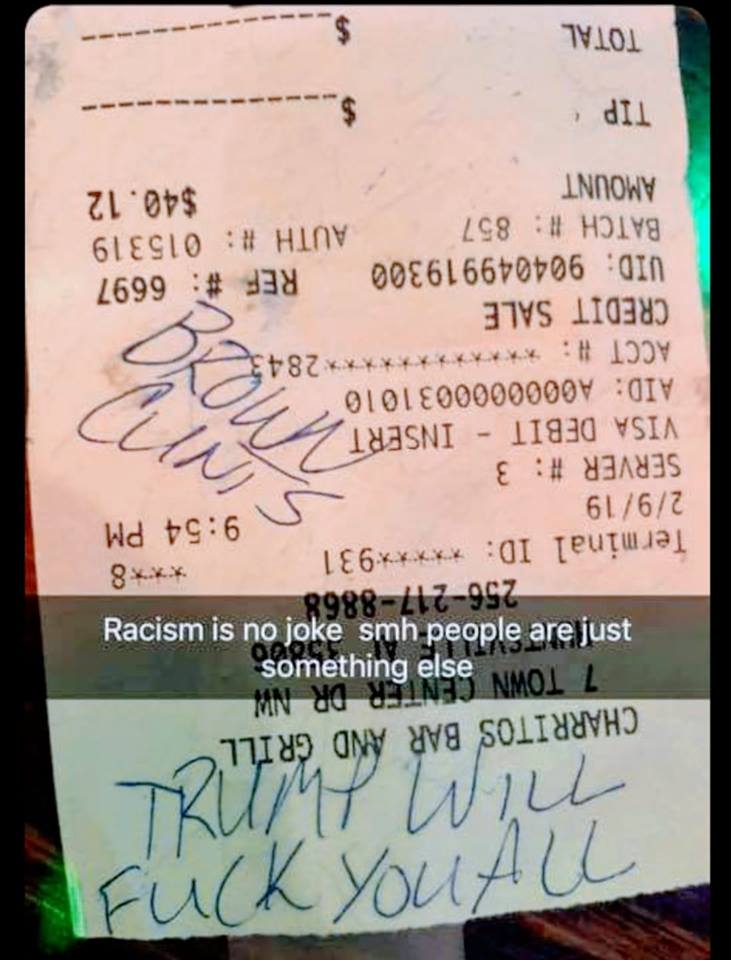 Restaurant owner, Vanessa Martinez, took to social media to fire back at his comments. “We would like to let everyone know that this behavior is not tolerated in our restaurant,” she wrote in a Facebook message. “Our staff and any customers in our facility require respect.”

The restaurant said the man’s visit was normal — barring a comment he made when asked whether he wanted to pay cash or card, according to news station WHNT. The customer allegedly said, “Do white people ever use cash?”

A similar situation happened back in January in “Under The Moon Cafe” in Bordentown NJ, where a costumer left a handwritten message on the check: “DON’T TIP IMMIGRANTS”. This after allegedly heard a multi-lingual server speak Spanish to another employee.

As hate crimes rise in the United States and we become powerless witnesses from shocking events as the ones in Charlottesville, or the atrocity committed in a Pittsburgh synagogue, one question arises everyday louder.

Why is hate so present in the United States?

Some say it has always been there, except it was dormant until the now president consciously or unconsciously incited hate against minorities and immigrants.

Is this a phenomenon of the Trump era? Is there a relationship between xenophobia and hostility towards refugees due to recent political rhetoric? If not, why hate crimes have grown since Trump won the presidency?

With many questions still unanswered the debate intensifies every day.