It is almost time to enjoy one of the most acclaimed sporting events of the year, the Superbowl. The day when millions of Americans and football fans gather in front of their televisions with family and friends to witness the duel between the New England Patriots and Los Angeles Rams. One of the favorite snacks for this event are chicken wings, guacamole, chips and salsa… but, let´s talk chicken wings.

In 2016, the National Chicken Council estimated that Americans consumed 1.3 billion chicken wings during the Super Bowl. So before placing an order or Google search for the best recipes, perhaps you should read this to really know what you are eating.

It is not the first time that complaints have been filed against chicken farms in China, the United States and Mexico. Chickens raised for their meat are often reared by the thousands in massive sheds and fed large amounts of antibiotics and drugs to keep them alive in conditions that would otherwise kill them. This reckless use of antibiotics makes medicines less effective for the treatment of diseases in human health, as it accelerates the development of drug-resistant bacteria.

Modern farm chicken is one of the most genetically modified animals

According to The New York Times, boneless wings, increasingly promoted by restaurants, are not wings at all, but slices of breast meat fried as wings and served with the same sauces.

On October 4, 2016, Jared Cook, a tight end for the Oakland Raiders, found among the wings that he had ordered something chilling: a fried chicken head. After this event, according to sport reports, the NFL player considered a vegetarian diet.

According to various animal rights organizations, more chickens are raised and killed to eat than all other animals combined. Chickens raised for their meat are bred to grow so large and so fast that some have difficulty moving, because of their unnatural body weight. These chickens are never allowed to go outside or do any of the things that are natural and important to them as animals, such as establishing a hierarchical order or nesting. 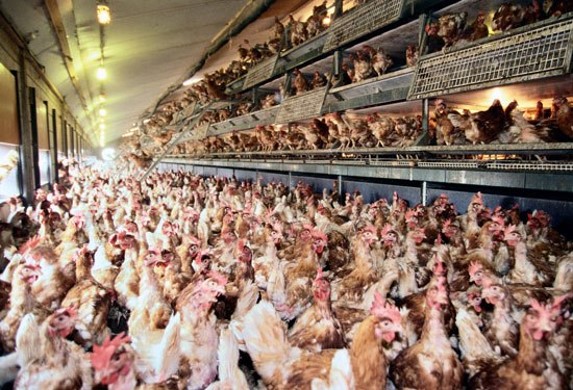 Although there are farms certified by the “American Humane Society” there really is not much “humanity” in the way these poor birds are treated.

In just seven weeks after birth, chickens huddle in trucks that transport them to the slaughterhouse. Once there, they are tied upside down by the legs, their throats are cut while they are still conscious, many are scalded to death.

Just remember next time you order those spicy, barbecue, buffalo wings with ranch dressing… You are what you eat.