Three people have died so far, including a 6-year-old girl.

A tragic accident happened sunday afternoon in the port of Progreso, where part of the roof of a bar named Mocambo on calle 68 by 21, collapsed, leaving so far three people dead. The accident occurred in the tourist area. 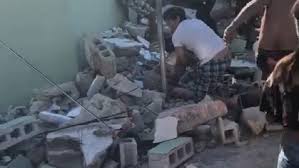 Scarlett, a 6-year-old child, Kimberly Salazar Juárez, 32, and an unidentified male, most likely a street merchant were crushed to death. The deceased were seeking refuge from the sun, by standing under the cornice that overhangs the pavement when the accident occurred.

Amongst the hospitalized taken to the IMSS Juarez Hospital in Merida were a 2-year-old boy, Gloria Acopa Sulú mother of the child and Julieta López Sulú, all for head trauma.  César Iván Romero and Cindy Braga Cortés were taken to the public hospital in Progreso. 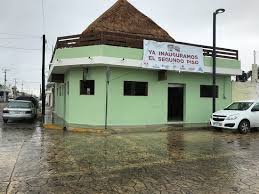 According to people from Progreso, this bar was recently purchased by a businessman from Merida, and renovated last year, and part of the new construction is what faltered yesterday around 3 p.m. when its facade and cornice fell onto passersby. Part of the ceiling also fell inside but no one was injured. The structural fault appears to have been with the new roof-top palapa bar, where the concrete and cinder-block wall gave way.

Federal police and the Navy of Mexico, showed up to make sure it wasn´t related to a criminal attack. The manager of the bar, Gerardo Limón Zambal was detained and questioned by authorities. 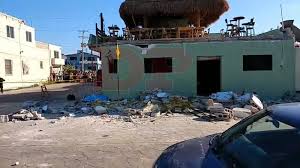 Progreso Mayor Julián Zacarías assured the ublic that there will be “timely follow-up” to the incident. No communication has been offered from the Mocambo. Its Facebook page was taken down sometime overnight.