Martha Bárcena, the Mexican woman who will face Trump

During her previous missions, as Mexico’s ambassador in Denmark and Turkey, will have little do to with her new tasks in the United States, where she will have to monitor Donald Trump’s Twitter account every day, who uses this social network to say negative things about Mexico.

1. With what basis and tools are you going into Mexico’s embassy in the United States?
– The main basis I have to establish a new phase in the relations with the United States is the mandate President López Obrador obtained in the polls; we don’t have a clearer mandate than 30 million votes, is a very solid mandate that indicates the desire of change in the majority of voters. That mandate of change that we already see reflected in initiatives carried out by Mexico’s government in conceptual things such as the fights against corruption, a more just country, with less inequality, the development of the south-southeast, projects are being worked on.
I arrive into the United States and the embassy is going to have a basis to say this isn’t going to be business as usual we’re going to do things differently and face the problems that, we’ve known this for a long time, worry not only the U.S. society but also the main business partners, such as the issue of corruption at the highest levels, insecurity, and violence, which is being faced. All this gives us the strength to negotiate with the United States.

2. What do you think the size of this challenge is?
– I think that when President López Obrador talked to me, shortly after the elections, to express his interest in me becoming the ambassador in Washington, I knew the challenge was huge but I didn’t imagine I would arrive into the United States in a situation as strained, as polarized. Yes, it’s a huge challenge. 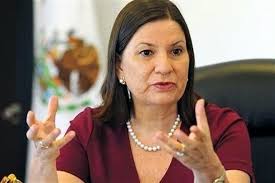 3. In the face of a challenge of this size, where are you going to begin?
– One of the priorities this year is the ratification of Mexico’s treaty with the United States and Canada (T-MEC), we’re looking at the times for the ratification of the treaty in Mexico and how are we going to help the treaty to be ratified in the United States, which is of Mexico’s interest, it’s an issue that is going to occupy the whole year because we have to be present during the lobbying, and if the ratification is achieved before summer, the implementing legislation will follow.
Another priority will be to check and constantly update what is the situation of the Mexicans in the United States, what migration legislation is being presented in the Senate, in the House of Representatives, we have to remember it’s the legislative power that has the faculty in regards to migration legislation.
Obviously [we will work] in coordinating the message we want to send with the embassy and consulates. Explaining in the United States what is President López Obrador’s government doing, its achievements.

4. And in regards to migration?
– We will be paying attention because, during Nancy Pelosi’s speech at the House of Representatives, it was mentioned that one of the priorities would be migration, which is possible for it to open a window of opportunity, with the Democrats’ initiative in the House of Representatives to update the migration legislation. The last big reform took place during Reagan’s presidency.
Let’s not forget that the migration legislation is the prerogative of Congress, what interests us is that the congress members make their decisions based on realities, not in prejudices, that they know what is happening in Mexico with numbers, so they don’t think migration is the same as 15 years ago.

5. Is it an advantage that the House of Representatives has a Democrat majority?
– It can bring many dialogue opportunities but we don’t know what are the results going to be because if the political climate is polarized, it’s difficult to predict positive results in regards to legislation.
We can’t rule out that we could reach agreements but we also have to be realistic and know that at the primaries for the 2020 election begin at the end of 2019m, the discourse is going to be radicalized, it’s going to be little rational, it’s very likely that Mexico, the border, and migration are still topics of debate because it has been the banner of the most conservatives.
Nevertheless, in the Democrat sector, there’s a migratory position that is closer to that of Mexico’s vision. We will see if this helps a more rational debate but it would be difficult to predict positive results.