First Ecological Police in the state of Yucatan

PROGRESO, YUCATÁN.- At the Coordinated Municipal Police facilities, the presentation of the First Ecological Police in the State of Yucatan took place. Commander Gerson González Ac, will be in charge of the “Enviromental Police” the third law enforcement agency corporation in Mexico, with the function of overseeing, care and protect the environment.

Julián Zacarías Curi, mayor of Progreso, and Emilio Raúl Caamal Gutiérrez, Director of the Coordinated Municipal Police, introduced Commander Gerson recently appointed, of the First Ecological Police of the State of Yucatán, who has a degree in Marine Biology, graduated from UADY.

The “environmental police” will work in pairs, composed of 28 agents in two shifts, of 14 people each, with schedules of 24 hours per shift, which will cover the municipal seat (Progreso) and the six police stations, with routes, including the beaches and sea shore areas, from Chuburná Puerto to Uaymitún.

The equipment used by these ecological guardians is worth more than 50,000 thousand USD, including fire-arms, radios, flap recording cameras, boots, uniforms, as well as bicycles, motorcycles and four-wheelers. 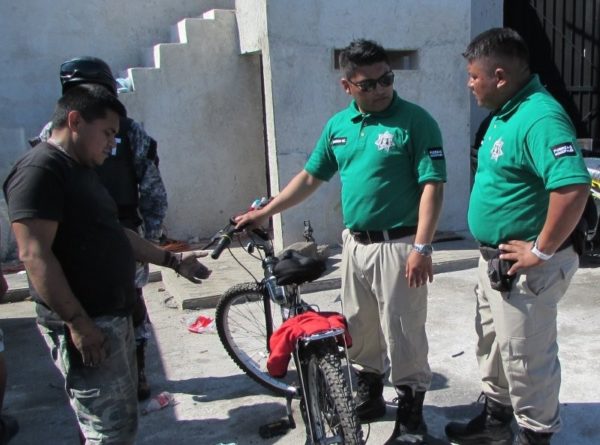 The mayor announced that local businessmen donated four-motorcycles and two 25 feet long, with outboard motors fast speed boats, that will be used for surveillance of the Yucatecan coasts, the Ría and the docks of Yucalpetén.

Surveillance will include: ​​beaches, mangroves, port, streets, prevent intentional fires at garbage areas and empty lots amongst others. Offenders will be sanctioned with jail for up to 72 hours and will carry out hours of community work, cleaning up garbage from public roads.