Will the Maya Train project put the jaguar population in risk?

Businessman José María Riobóo name was recently revealed as President Andrés Manuel López Obrador’s advisor in the Maya Train project, which construction works will kick off Sunday Dec. 16th in Palenque, Chiapas. On December 10, AMLO met with the members of his cabinet in order to review the launch of the project.

Rioboó ruled out that the meeting was aimed to talk about the new airport in Mexico City, but to discuss the Maya Train project.

The Secretary of Communications and Transport, Javier Jiménez Espriú, said that on Sunday in Palenque all the precise information will be announced, since the event is being organized by the National Fund for Tourism Promotion.

However, also on Monday December 10, Mexico City based newspaper El Universal, published an opinion piece in which specialists warned of possible damage to aquifers and the habitat of jaguars by the Maya Train project. Experts pointed out the need for studies to measure the impact of vibrations caused by the train, and warned about the “wall” that will be imposed on protected natural areas where species such as jaguars live, as well as possible damage by wastewater and garbage handling.

In the municipalit of Tulum Quintana Roo, lies the largest cave system on the planet, Sac Actún, where for three decades, specialists have been given the task of documenting the multiple systems that exist. To date, 358 have been registered, representing nearly 1,400 kilometers of water labyrinths that make up the largest freshwater reserve in Mexico.

In this same region, but at ground level, President Andrés Manuel López Obrador plans to build the Maya Train track and it could represent a risk for these sites of high biological value and cultural heritage. For the construction of the Mayan Train it will be essential to know the exact location of the stations, to avoid damaging these underground bodies of water. 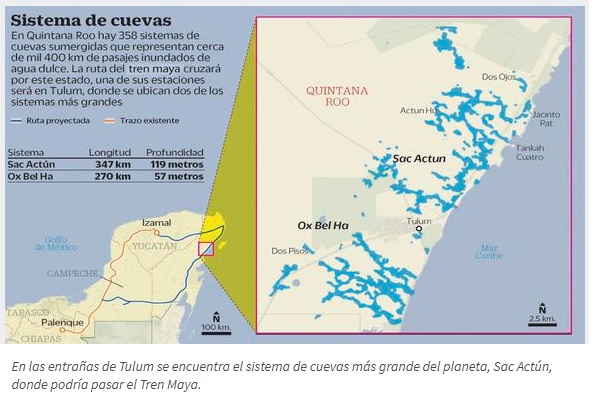 “These aquifers make up one of the largest freshwater storage on the planet, they are of great importance for the ecosystem because many of the roots of the trees feed on this water,” says Francisco Remolina, former director of the Flora and Fauna Protection Area of Yum Balam and current member of the Group of Experts for the Conservation of Wild Felines of Mexico.

Meanwhile, Arturo Bayona, responsible for environmental studies of the Great Maya Aquifer Project, says that if the railroad is placed where the karst layer is thin, there could be cracking and an eventual collapse of this layer.

“The studies of soil are fundamental because it is necessary to guarantee that the crust of rock is strong enough to, first, bear the weight of the train and second, to endure the vibration provoked by the constant passing of the train”, Bayona said.

The vibration is one of the factors that most worries the experts. “Some cave systems are very unstable. We must consider that vibration will be generated for years and that it could accelerate the natural process of collapsing, “says Emiliano Monroy Ríos, hydrogeologist at the Northwestern University Technological Institute.

One of the spots that are most threatened by this project is Sac Actún, in the municipality of Tulum, Quintana Roo, one of the largest cave systems in the planet, and one of the areas where the Maya train will be passing through.

What about the jaguar?

Regarding the invasion of the jaguar’s habitat, Remolina, member of the Group of Experts for the Conservation of Wild Cats, points out that after the Amazon, the most important jaguar population of the planet lives in the Yucatan Peninsula, and the route has been traced to pass right through regions inhabited by a considerable number of these felines in danger of extinction.

The train and railroad tracks will represent a physical barrier inside the jaguar’s habitat. The animals need a territory range, an area for hunting, breeding and caring for their young, and in the case of the jaguar, we’re talking about a very large area, estimated between 30 and 50 square kilometers,” Francisco Remolina added.

“If we raise a ‘wall’ that restricts the jaguar to move from one side to the other, we will affect the animal’s life cycle, they will not be able to find specimens to mate and reproduce, we will deny them the possibility of having greater genetics variability of which to ‘nurture’ in order to preserve the species”, the expert points out.

Francisco Remolina explained that the jaguar is an endangered species that has gone through many adaptation processes during the last century, and now the train project could place the species in a situation of greater risk of extinction.