WASHINGTON (Reuters) – On Wednesday December 12th, the U.S. Secretary of State Mike Pompeo praised the new government of Mexico on immigration issues and said the two sides have discussed the importance of stemming the flow of undocumented migrants before they get to the U.S. border. 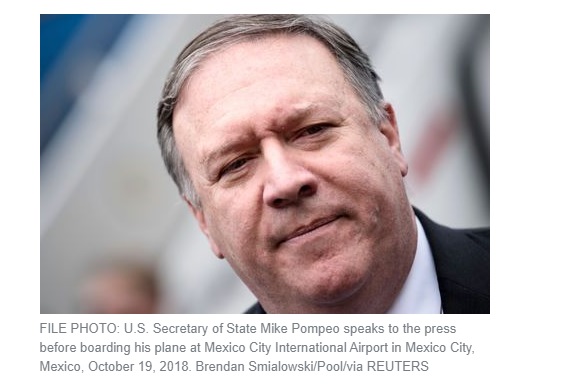 U.S. President Donald Trump has called the migrants’ effort to seek asylum in the United States an “invasion” and has deployed the military to the border to reinforce security measures.

He has reiterated his campaign promise to build a wall along the U.S.-Mexico border, even after Mexico repeatedly rejected his demand that it pay for the billion-dollar project.

Funding for the border wall has been a sticking point in spending bills before the U.S. Congress, and Trump clashed with leading Democrats over the issue during an Oval Office meeting on Tuesday.

Pompeo said he supports the effort to build a wall.

“We have to have the capacity to control entry to our country everywhere,” he said. “And a wall is a vital component of that.”

(Reporting by Doina Chiacu; Editing by Chizu Nomiyama and Steve Orlofsky for REUTERS)