The new governor of the Mexican state of Puebla and her politician husband were killed on Monday Dec. 24, in a helicopter crash in central Mexico, according to the head of their political party.

Puebla governor Martha Erika Alonso and her husband Senator Rafael Moreno Valle died in the crash, as did the pilot, co-pilot and a fifth passenger, according to Public Security and Civil Protection Secretary Alfonso Durazo.
President Andrés Manuel López Obrador also confirmed the deaths on Twitter Monday evening. He offered his condolences to the victims’ families and vowed a transparent investigation into the cause of the Christmas eve crash. 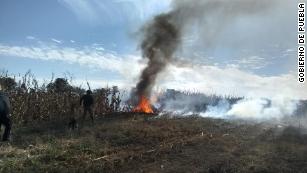 The site of the helicopter crash that killed the governor of Puebla and her husband.
The crash occurred at 2:40 p.m. local time about ten minutes after takeoff, Durazo said at a press conference Monday night. Communication with the aircraft was lost and a crash was then heard, he said.
“When the aircraft was in flight some three nautical miles from the Puebla airport, it suffered an apparent failure which hasn’t been determined yet,” Durazo said.
The helicopter pilot and co-pilot were identified as Captain Roberto Cope Obregon and Captain Marco Antonio Cabera Romero, Durazo said. Durazo said the fifth passenger still has not been identified.
Durazo said the aircraft was found in the town of Santa Maria Coronango. The helicopter was an AugustaWestland AW109, which was owned by the Puebla-based company Servicios Aereos del Altiplano, Durazo said.
The couple was headed to Mexico City, Mexico’s Communications and Transportation Secretary Javier Jimenez Espriu said. He said Mexican Civil Aviation authorities are at the scene of the accident to further investigate the cause.
“We cannot speculate in any way,” Espriu said. “We will be clear and transparent and let you know any evidence we find.”
Espriu said both the plane and pilots had all the necessary authorizations and paperwork to operate the flight up to date and in order.
CLICK HERE FOR FULL ARTICLE ON CNN
SOURCE: CNN