Flanked by a group of politicians from across the country, Texas Democrat Beto O’Rourke called on the public to pressure Donald Trump’s administration to close an immigrant detention centre in Tornillo which houses thousands of migrant children.

The congressman, who garnered national attention during his close-shot bid to unseat Republican incumbent Ted Cruz during the 2018 senatorial race in Texas, tweeted to say on Saturday: “There are 1,300 kids ready to leave to live with sponsors who have already been identified. But these children remain at Tornillo each day because this administration has deliberately prolonged the process of releasing them.”

Mr O’Rourke spoke with reporters outside of the detention centre on Saturday afternoon, bringing attention to the fact many of the young refugees had taken arduous journeys to arrive at the nation’s border — to wind up being housed in a facility separately from their families for months on end.

“When we attempted to speak with these children and ask how they’re doing — I was able to ask them the countries from which they came, I heard Guatemala and Honduras — ask about the conditions, they kind of nodded their heads, ‘it’s okay,’” the congressman said. “But what are they going to say when everyone around them is watching?”

“There was something on the look on their faces that we saw,” he added, “the way that that they weren’t really engaged in the sports that they were playing out in those fields — no place is going to be right unless it is with their parents or their families.”

The detention facilities in Tornillo have drawn backlash over a series of controversies related to their ever-expanding populations of young refugees and a lack of oversight surrounding the employees whose care they have been placed in.

The 13- to 17-year-olds held at Tornillo weren’t separated from their families at the border this summer. They remain in government custody in part because new federal requirements mandating more stringent background checks on their families have slowed their reunifications, filling shelter beds around the country to capacity.

Almost all the teens at both facilities entered the US on their own, hoping to join relatives or friends. 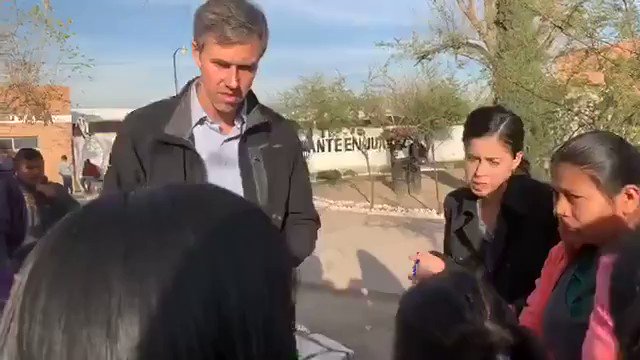 Beto O’Rourke visited Juárez to hear directly from asylum seekers. Met one mother who traveled from Guatemala with her 10-year-old daughter. It took them more than 3 weeks to arrive here. Their place in line to petition for asylum is now written on their arms with a marker: 2142 & 2143.

A government report found staff had not undergone FBI background checks or child welfare screenings before being hired to work at the Tornillo sites.