OPINION: On December 1, AMLO Became the President of Mexico

On December 1st, 2018, Andres Manuel Lopez Obrador became the President of Mexico.  (Lopez Obrador is often referred to as AMLO, an acronym formed by his initials.)

AMLO won the election this past July 1st, defeating three other candidates: Ricardo Anaya of a PAN-led coalition, Jose Antonio Meade of a PRI-led coalition, and independent candidate Jaime Rodriguez Calderon, better known as Bronco.   AMLO ran as the standard-bearer of a coalition led by the MORENA party.  (See  Third Time’s the Charm – AMLO Wins the Mexican Presidency.)

The 2018 election was AMLO’s third presidential candidacy, having run in the two previous elections: 2006 and 2012, both times as standard-bearer of the PRD, which in this past election was part of the PAN coalition.

But this time AMLO was triumphant, and overwhelmingly so, winning 53.19% of the vote. In Mexican presidential elections, a candidate need only have a plurality, not a majority of the votes. But AMLO won by commanding a clear majority.

Congressional elections were also held on July 1st, and the new Congress has been in office since September 1st. (See The Mexican Congress and its Sixty-Fourth Legislature.)  MORENA is the biggest party in Congress, and the AMLO coalition forms a majority in both chambers.

AMLO’s party, which he himself founded, is MORENA, an acronym for Movimiento Regeneración Nacional, the National Regeneration Movement.  The party was originally a cross-party organization, founded in 2011 to support AMLO’s 2012 presidential campaign.  MORENA was registered as a political party in 2014.  And now here it is, the most powerful party in the country.

Presidential elections are held every six years (as opposed to every four years in the United States).  Mexico has a five-month transitional period, and so although AMLO was elected July 1st, he didn’t take office until December 1st.

So, on December 1st the change in administrations was made, with Enrique Peña Nieto (president since 2012) stepping down and AMLO taking office.

As per custom, the actual change of administration took place in a ceremony held in the Mexican Chamber of Deputies (Cámara de Diputados), Mexico’s equivalent of the U.S. House of Representatives.

AMLO took the oath of office, and the ceremonial presidential sash was transferred from outgoing President Enrique Peña Nieto to AMLO.  This was followed by a speech delivered by the new President Lopez Obrador.

The speech began with President AMLO’s proclamation of the Cuarta Transformación, the “Fourth Transformation.”

Quoting the new Mexican President: “… we do not just initiate a new government, but we begin a change of political regime. From now on a peaceful and orderly, but at the same time deep and radical, transformation will be carried out.”

The “Fourth Transformation” of which the President speaks is a radical change in Mexican politics and the economy, including an end to corruption, a more austere government and more help for needy Mexicans. 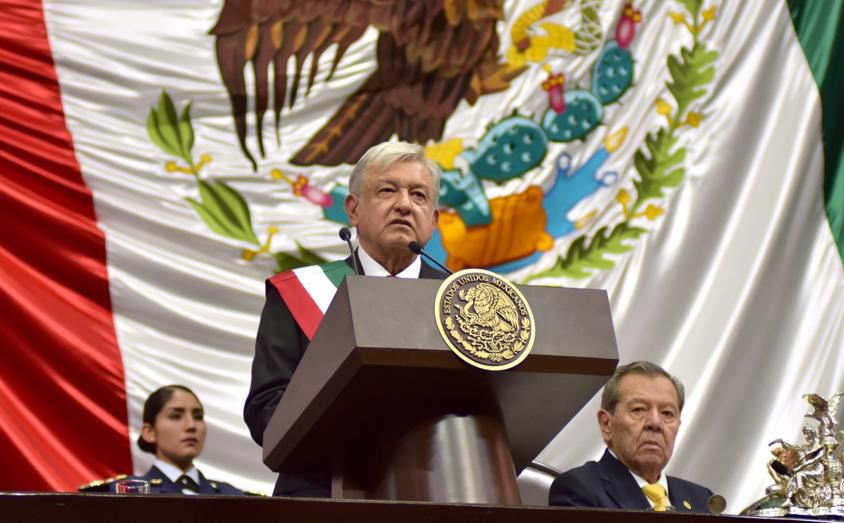 The new presidential website is up (click here) and this historical association is evident on the new symbol of the government at the top of the website.  It portrays five historical Mexican figures with whom AMLO identifies: Jose Morelos and Miguel Hidalgo of the Independence period, Benito Juarez of the Reforma period, Francisco Madero of the Revolution, and Lazaro Cardenas, president from 1934-1940.

AMLO is a visionary indeed, and his new presidency looks to be an interesting one.  I wish him and his new administration the best.

One more thing: Regarding that five-month transitional period I discussed earlier, that is scheduled to change.  As a result of the 2014 political reform, Article 83 of the Mexican Constitution was amended in 2017 to reduce the presidential transition period from five months to three months.

So according to this change, in 2024, when AMLO is scheduled to complete his presidential term, he will step down in favor of the next president, not on December 1st but on October 1st.

Thus, the new presidential transition period is to be three months rather than five months.

And since this presidential term will be shortened to adapt the new schedule, that means that AMLO’s term, rather than being a full six years, should be five years and ten months.

Allan Wall, an educator, resided in Mexico for many years.  His website is located at http://www.allanwall.info.