“If thousands of people flock to this town, how will we be able to service them? I’m afraid of that growth,” Zendy Euán, spokeswoman for a community organisation,said in reference to the Mayan Train (TM) project, a railway network that will run through five states in southern Mexico.

Euán, a Mayan indigenous woman living in the municipality of Felipe Carrillo Puerto (FCP), told IPS that they lack detailed information about the megaproject, one of the high-profile initiatives promised during his campaign by the new leftist President Andrés Manuel López Obrador, popularly known by his acronym AMLO.

“It’s not clear to us. We don’t know about the project,” said Euán, who also questioned the benefits promised by the president, who was sworn in on Dec. 1, for the local population, as well as the mechanisms for participation in the project and the threats it poses to the environment.

“They are violating our indigenous rights. We don’t agree with how the consultation was carried out, and we don’t see the benefits for the local communities. This is aimed at tourist spots. Those who will benefit are the big businesses.” — Miguel Ku

“What will be the benefit for the local community members, for the craftswomen? As ecotourism communities, will we be able to promote our businesses and goods?” said the spokeswoman for the Community Tourism Network of the Maya Zone of Quintana Roo, one of the states in southeastern Mexico that share the Yucatan Peninsula, on the Atlantic coast, with 1.5 million inhabitants.

The network, launched in 2014, brings together 11 community organisations from three municipalities of Quintana Roo and offers ecotourism and cultural tours in the area, its main economic activity.

In the municipality of FCP, home to just over 81,000 people, there are 84 ejidos,areas of communal land used for agriculture, where community members own and farm their own plots, which can also be sold.

One of them, of the same name as the municipality, FCP, covering 47,000 hectares and belonging to 250 “ejidatarios” or members, manages the ejidal reserves Síijil Noh Há (“where the water flows,” in the Mayan language) and Much’KananK’aax (“let’s take care of the forest together”).

Euán’s doubts are shared by thousands of inhabitants of the peninsula, which receives almost seven million tourists every year.

IPS travelled a stretch of the preliminary TM route through Quintana Roo and the neighboring state of Campeche and noted the general lack of detailed information about the project and its possible ecological, social and cultural consequences in a region with high levels of poverty and social marginalisation.

The government’s National Tourism Fund (Fonatur) is promoting the project, at a cost of between 6.2 and 7.8 billion dollars. The plan is for it to start operating in 2022, with 15 stations along 1,525 kilometers in 41 municipalities in the states of Campeche, Chiapas, Quintana Roo, Tabasco and Yucatán.

The locomotives will run on biodiesel -possibly made from palm oil- and the trains are projected to move about three million passengers annually, in addition to cargo. 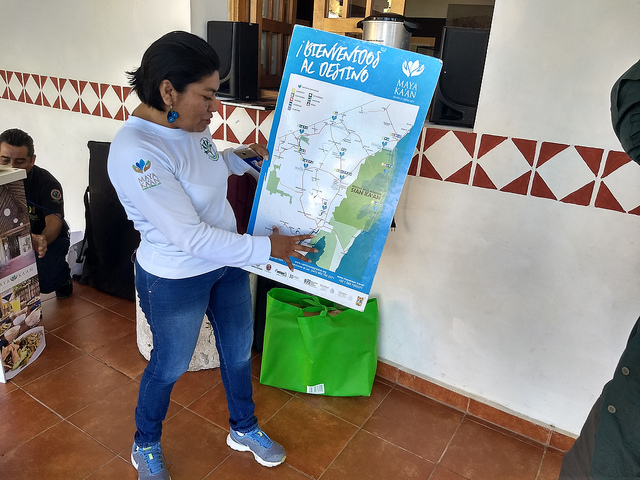 Zendy Euán, spokesperson for a community tourism network, explains in the Mayan Museum of the municipality of Felipe Carrillo Puerto, in the state of Quintana Roo, that the Mayan Train will run through key environmental areas of southern Mexico. Social and indigenous organisations question the benefits of the megaproject, one of the star projects of the new president, Andrés Manuel López Obrador. Credit: Emilio Godoy/IPS

The railway will cut through the heart of the Mayan jungle, an ecosystem that formed the base of the Mayan empire that dominated the entire Mesoamerican region – southern Mexico and Central America – from the 8th century until the arrival of the Spanish conquistadors in the 16th century.

This is the most important rainforest in Latin America after the Amazon region and a key area in the conservation of natural wealth in Mexico, which ranks 12th among the most megadiverse countries on the planet.

The region belongs to the Mesoamerican Biological Corridor consisting of habitats running from southern Mexico to Panama, the southernmost of the seven Central American countries, and is home to about 10 percent of the world’s known species.

In the Yucatan Peninsula, shared by the states of Campeche, Quintana Roo and Yucatan, there are 25 PNAs, with a total area of 8.5 million hectares.

“What’s going to happen? We don’t know the route, we don’t have information. We have to study this closely,” Luís Tamay, the indigenous president of the Commissariat of Common Assets of the Nuevo Becal ejido in the municipality of Calakmul, in Campeche, told IPS.