After a brief respite from attacking the migrant caravan traveling to the U.S. border, President Donald Trump slammed it again Friday, calling it a “con” because the travelers were waving flags from their own countries.

Trump relentlessly lashed out at the caravan during his flurry of campaign appearances stumping for Republican candidates ahead of the midterm elections. He also dispatched 5,200 U.S. troops to the border.

But then he was uncharacteristically mum on the issue after the GOP lost control of the U.S. House to the Democrats. Voter exit polls revealed that Americans were more concerned about health care than immigration, suggesting that Trump may have overplayed his caravan hand.

But he was back at it Friday on Twitter. Trump tweeted that it was “ironic” that people seeking asylum in the U.S. were waving the flags of their countries. He said it was proof that their search for safety in America was “all a BIG CON.” 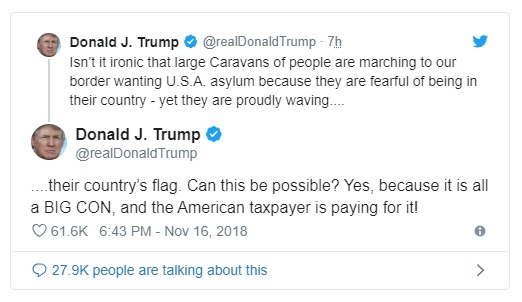 Several responses pointed out that it is possible to love one’s country yet be fearful enough to leave during dangerous times — or to have very mixed feelings about a nation and its government.