Pib, an essential part of the ancestral ritual of Hanal Pixán

The tradition of Mayan cuisine was highlighted at the Festival del Pib with a hundred tables full of different types of Pibs, to celebrate the ancestral ritual of Hanal Pixán, or food of souls, with which the Yucatecans, in southern Mexico, begin the celebrations for the Day of the Dead.

When the first edition of the Festival del Pib was held, communities and restaurants from all over the southeastern state accepted the challenge of bringing their recipes to the neighborhood of San Sebastián.

At a temperature close to 40 degrees Celsius later in the afternoon, they received thousands of people who came on a gastronomic journey in search of the delicacy that, according to Yucatecans, “only tastes good” if eaten at this time of the year.

From the eastern municipality of Valladolid, the sons of chef Jorge Medina, a renowned chef from the eastern region of Yucatan, underlined their heritage as Pib experts.

Meanwhile, the Las Veletas ranch exhibited its Spanish stock with photographs of dressage horses and its farm, where smaller tamales also known as mucbilpollos were cooked, with and without xpelón (a type of white bean endemic of the region).

The Pib were just out of the oven (which is traditionaly an underground oven), were covered by banana leaves, with a crispy crust of corn inside stuffed with pork or chicken meat (or a mixture of both), also features tomato, onion, and “kool” (a kind of thick sauce of tomato and achiote).

On a festive weekend, the meridanos and hundreds of tourists did not mind the hot day, and swept the entire pib reserves, which they completed with dessert tables full of marzipan, ice cream and drinks like horchata and chaya.

The gastronomic offer included, in addition, the timeless panuchos and salbutes of cochinita pibil, of turkey and relleno negro (black stuffing), kibis (meat with fried wheat) churros and even crepes (marquesitas).

Together on a journey that began three years ago in Canada, the Danish husbands Niels and Ranveg Clemmensen came to the festival and did not leave without their “piece of Pib.”

“We have been traveling for three years, we started in Canada and the United States and now we are very happy to be in a country like Mexico and be able to see and enjoy all these traditions, their food is not common for us, but we find it absolutely delicious, we like it very much”, said Efe Niels.

Cook Silvia Peraza Ruiz said that the investment in each of Pib is about 500 Mexican pesos, ie about $ 25.80 USD.

“If they are made by hand, baking with firewood, stones and leaves under the ground is only possible for a few pieces, which makes it difficult to make large quantities,” she said. 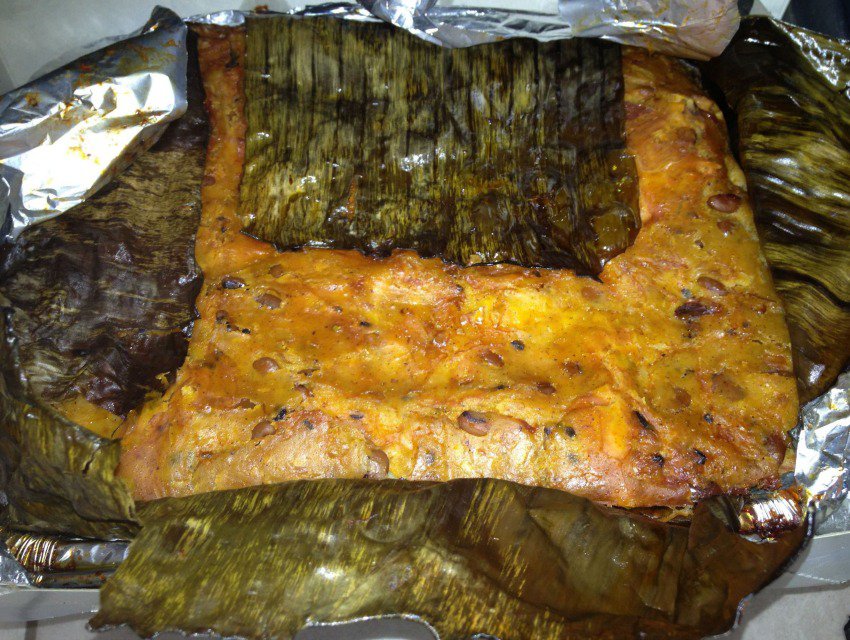 In turn, former professional baseball player, Hector Castañeda, presented his own “pibes”, which he learned to cook years ago, when he was hired by the Yucatan Lions, local baseball team.

The comments about the “pibes” were mostly positive, although there were those who complained about the lack of Castakán pibs.  Castakán is pork that is stuck to the skin of the animal and that although it is greasy, it has a salty flavor , delicious for many, not recommended for those who want to take care of their weight though.

“Don’t try Castakán, it’s more expensive, and it goes straight to your coronaries,” said one of the vendors smiling, showing off the often black Yucatecan humor.

The festival, eminently gastronomic, also offered a sample of the funerary culture of Yucatan, with dozens of mestizas and “uinics“, women and men who, in the indigenous style and with painted faces of skulls, strolled and danced in the improvised market.

According to the local tradition, when the pib s come out of the oven, the souls that rest in the cemeteries of the area, leave their graves to come and taste a piece of this delicacy that they enjoyed while alive and that brings them back to this world for a while, with their relatives, leaving the “Xibalbá” (Maya world of the dead) for one day and one day only.

by Alejandro Azcárate for TYT