Mexico’s outgoing government has conferred the country’s highest civilian honour for foreigners to US President Donald Trump’s son-in-law Jared Kushner, a decision that has caused a social media outcry.

President Enrique Peña Nieto is expected to bestow the Order of the Aztec on Kushner, who is also a senior White House adviser, in a ceremony on the sidelines of the G20 summit in Buenos Aires on Thursday, November 29.

Peña Nieto defended his decision during a work tour in the State of Sinaloa.

“It is an attribution of the president and I want to give it to him,” he told reporters who asked to justify the announcement. “I want to recognize Jared Kushner, who has been a great ally of Mexico,” said the president.

The 37-year-old has been credited with renegotiating the North America Free Trade Agreement (NAFTA) between Mexico, the United States and Canada.

The revised agreement, known as the United States-Mexico-Canada Agreement (USMCA), replaced the nearly 25-year-old NAFTA, which the US president had labelled a disaster and promised to cancel.

“Mr Kushner’s participating was decisive in initiating the process of renegotiating NAFTA, preventing a unilateral exit from the United States of said treaty, and his constant and effective involvement was key to achieving a successful conclusion of the negotiations,” read a Mexican foreign ministry statement.

US National Economic Council Director Larry Kudlow said on Tuesday that leaders from the three North American countries are expected to sign the new trade deal during the G20 summit.

For many political analysts, this was the last blow from President Peña to Mexico, after he ruled for six years, from his own private little world and fueled by a power group elite. Peña Nieto’s term was marked by violence, corruption and deception.

Mexican historian Enrique Krauze said awarding Kushner the Order of the Aztec “reflects a supreme attitude of humiliation and cowardice”.

Translation: Kushner is the son-in-law of [the man] who called Mexicans murderers and rapists. Giving him the Aztec Eagle is a supreme attitude of humiliation and cowardice. 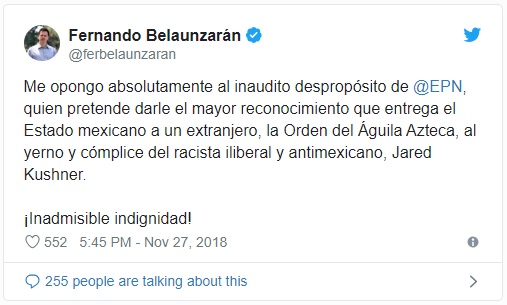 Translation: I am opposed to the unprecedented nonsense of @EPN, who intends to give the highest recognition given by the Mexican State to a foreigner, the Aztec Order of the Eagle, to the son-in-law and accomplice of the illiberal and anti-Mexican racist, Jared Kushner.

In fact, Peña’s structural reforms never were what he promised, the man himself was featured on thousands of TV and radio spots with which he bombarded the people of Mexico and in the end, the energetic prices went up, the national currency lost monetary value against the American dollar, unemployment and insecurity went through the roof, and finally, he leaves an unprecedented humanitarian crisis with the “Migrant Caravans” issue.