The NFL has decided to move Monday night’s showdown between the 9-1 Chiefs and Rams from Mexico City to the Los Angeles Memorial Coliseum because of poor field conditions at Estadio Azteca, it was announced Tuesday November 13.

Players had strongly considered not playing if the league had opted to keep the game in Mexico City, sources told ESPN’s Adam Schefter earlier Tuesday. Soccer games and concerts coupled with a significant amount of rainfall there have left the field inside Estadio Azteca a mess.

“It’s not fair to risk our health,” a prominent player told Schefter on Tuesday. 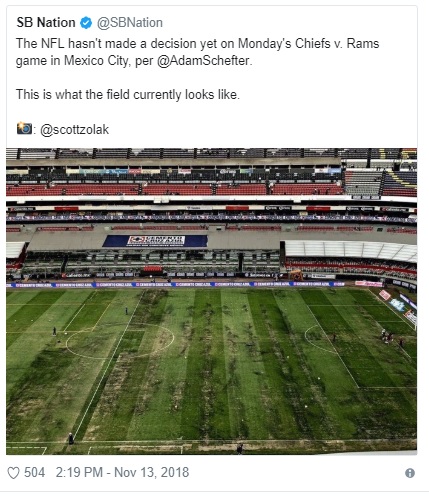 Ticket information for the game in L.A. was posted on the Rams’ website Tuesday night, and the refund policy for the game in Mexico City will be announced by the NFL in the coming days.

The Rams will be providing thousands of complimentary tickets to first responders and those who have been affected by the recent tragedies in Southern California.

The NFL has a procedure in place that states all teams that forgo a home game to play internationally, as the Rams did, are required to keep their home stadium available as a contingency.

The league, in a statement, said it consulted with the NFL Players Association — as well as club field experts and local and independent outside experts — in making the decision to move the game, as the field at Estadio Azteca did not meet NFL standards for playability and consistency.

“We have worked extensively with our partners at Estadio Azteca for months in preparation for this game,” Mark Waller, NFL executive vice president of international, said in a statement. “Until very recently, we had no major concerns. But, the combination of a difficult rainy season and a heavy multi-event calendar of events at the stadium have resulted in significant damage to the field that presents unnecessary risks to player safety and makes it unsuitable to host an NFL game.

“As a result, we have determined that moving the game is the right decision, and one that we needed to announce now in order to allow our teams and fans to make alternate arrangements.”