Naked, bruised and battered a woman runs to avoid being raped in eastern Mérida

“He grabbed me and threw me to the ground in a vacant lot; the man wanted to rape me there. Only God knows how I was able to escape from him “, declared Yajaira C., who last Thursday November 9th, late at night, was the victim of a man who assaulted her after she got out of a taxi in the east of Mérida. “If I did not get away from him, I could have died” she added.

“I left at 11 at night from my house, and at the corner of Calle Esperanza I stopped a taxi. When I got in, a subject suddenly came out of nowhere asking if the driver could take him to Colonia Melchor Ocampo, in the east side of Mérida. The taxi driver asked me if he could take him first, since that on the way to Francisco de Montejo where my family was expecting me, and I agreed, ” said Yajaira, not knowing that this was the worst decision she has ever made in her life.

With the left eye and the mouth completely purple and swollen, scratches on the arms and neck, as well as bruises on her thighs, the lady continued narrating how the incident that changed her life happened.

“When we arrived at the Melchor Ocampo neighborhood in eastern Mérida, the taxi driver said to me: ‘Excuse me miss, this is my last stop’, and I told him: ‘you said you were taking to Francisco de Montejo’ and the driver replied: “No I´m not, get off and grab another taxi.” So she got off the taxi, and it was at that moment that her aggressor, whom she remembers as a tall, robust man, with dark skin, straight black hair, and dressed in a vertical striped shirt, reached out to try to sexually abuse her.

When seeing that Yajaira insisted on asking for help, the man punched her repeatedly on the face, but she never gave up and struggled for her life. “Only God knows how I could get away from him, and then I went out running naked on the street, crying for help. 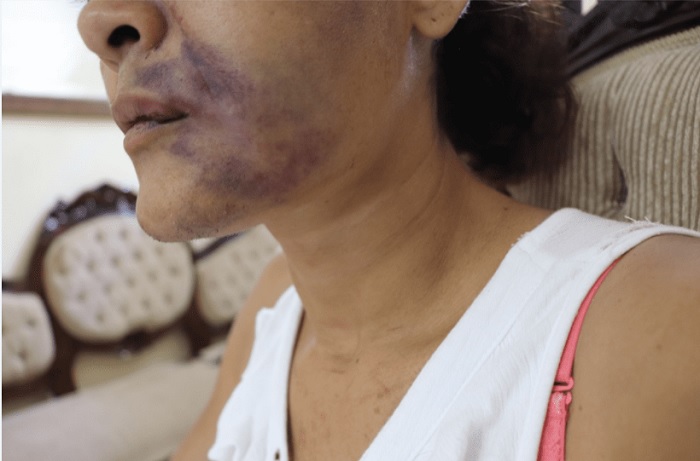 ‘Help, help, he wants to kill me, he wants to rape me! She shouted while running down the street. ‘ The man came behind her, but somehow she ran faster and kept asking for help.

It was a man, who when listening to the desperate cries of the woman helped her from inside his house located in colonia Melchor Ocampo. “He gave me a pair of shorts, but he did not want to open the door for me”, Yahaira recalls.

Yahaira ran two more blocks and took got inside a store; there the people supported her and called the police, who helped her and protected her. Then, they called her husband, who went to pick her up.

Yahaira said she had not reported the incident to the authorities yet, but that she is intending to do so soon, because she does not want any other woman to have to go through such a terrible experience, and advices not to take taxis late at night.